If anything, Declan Rice may be too mature for Manuel Pellegrini’s own good. The teenager’s all-seeing performances in holding midfield may have convinced his manager it was safe to revert to 4-4-2 back in November. One central midfielder was therefore dumped, as the 4-3-3 that plugged West Ham United’s yawning early-season gaps fell by the wayside. Fortunate victories over Cardiff, Crystal Palace and Fulham masked the lack of balance this switch engendered. A subsequent festive period run of one win in four, therefore, came as little surprise to more keen-eyed observers. 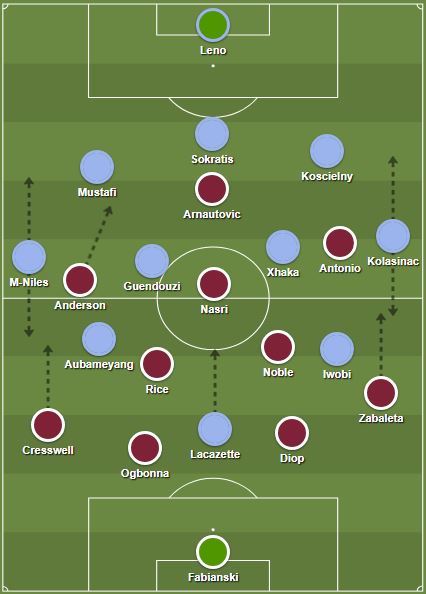 The ease with which Watford’s 4-2-2-2 exploited space between the lines kicked off a disappointing sequence for the Hammers, whose Christmas was low-lighted by Burnley’s embarrassingly dominant triumph at Turf Moor. Pellegrini’s parlous 4-4-2 was culpable in both reverses: surprising given the 4-2-3-1-inspired win over Southampton that sat sandwiched in between.

Pellegrini seemed intent upon persevering with his preferred system, regardless of any apparent downsides. A fortunate comeback draw at home to Brighton followed, in which his side struggled to control midfield against Chris Hughton’s 4-1-4-1. Two more concessions from set-pieces, bringing West Ham’s tally to nine shipped this season, didn’t exactly help the London Stadium mood either. The role played in both by centre-back Issa Diop, still incredibly raw, stood as a further worry: regular partner, the preternaturally assured Fabien Balbuena, looks set for a long injury-enforced absence.

Fortunately for Pellegrini, who wisely reverted to 4-2-3-1 for this one, Diop promptly answered his critics in an emphatic manner. The visit of Arsenal, ever a banana-skin for the Hammers, brought with it the threat of Unai Emery’s in-form front-three. Spearheading an unchanged side (from the 4-1 win over Fulham), Alexandre Lacazette, Pierre-Emerick Aubameyang and Alex Iwobi had shared designs on consigning Arsenal’s recent patchy form to the rubbish tip. Diop, however, had other ideas.

Reacting to Lacazette’s tendency to drop deep, Diop duly followed, invariably nipping ahead to intercept balls played into his fellow countryman’s feet. Exemplifying a committed West Ham team performance, within which no Hammer gave any quarter to Arsenal in the middle-third, Diop used his fearsome physical attributes super-appropriately.

With Lacazette determined to drop off and oil his side’s laboured build-up play, Arsenal desperately needed others to run in the opposite direction. Here, the continuing decision to overlook Aaron Ramsey becomes increasingly difficult to justify. Few Premier League midfielders possess the third-man running capacity of the Juventus-bound Welshman. And, while Iwobi’s one-touch facilitating menaced between the lines, neither he nor the anonymous Aubameyang could even evince a passable impression.

Only the forward runs of left-wing-back Sead Kolasinac offered the Gunners any real hope of penetration. The Bosnian, a liability in defence as always, nonetheless regularly worried Pablo Zabaleta in the West Ham’s defensive-third, prompting the evergreen Argentine to request more help from Michail Antonio. Arsenal worked that very overload to wonderful effect in the 22nd minute, but Rice was on hand to intercept Kolasinac’s Lacazette-bound pull-back.

Unsurprisingly, that wasn’t to be the internationally-coveted midfielder’s only vital intervention of the afternoon either. With Mark Noble pulling the strings to his right, Rice focused on destruction, winning possession for his side on a game-high 10 occasions. The 19-year-old should have opened the scoring on the stroke of half-time too, after beating Shkodhran Mustafi to a Felipe Anderson corner. Rice instead directed his free-header wide, but was not to be denied on the other side of the break. Samir Nasri, perhaps the genuine number-10 Pellegrini has been looking for, provided the layoff; Granit Xhaka, the botched clearance.

Rice’s career-first goal stemmed from the second-phase of a corner-kick, Arsenal’s first such concession of the season. But, given the frequency with which West Ham got in behind Emery’s wing-backs to win them, it’s no surprise that one of the seven eventually paid a dividend. When one consider’s Arsenal’s willingness to press, and the defensive injury-crisis presently on Emery’s hands, there is a sense that this 3-4-2-1 leaves the likes of Mustafi and Laurent Koscielny fatally exposed on the flanks. Wingers Antonio and Anderson took full advantage, running with the ball at every opportunity. Indeed it was Anderson, downed by Mustafi at the cost of a yellow-card, whose dribbling initiated the sequence of set-pieces from which his side eventually grabbed the lead.

Emery, always keen to change shape when the chips are down (and even, sometimes, when they’re not), promptly turned to his bench. The Spaniard’s 3-4-2-1 duly gave way to 4-3-3, with Mustafi making way for an additional central midfielder. And, although Ramsey’s box-to-box presence briefly ignited Arsenal’s inert attack, the visitors never looked like grabbing an equaliser. Zero Arsenal shots after the 68th minute tells its own story, as Aubameyang’s failure to convert a 65th-minute Kolasinac centre represented his side’s last real opportunity. Aaron Cresswell, who has finally dislodged the unreliable Arthur Masuaku from Pellegrini’s plans, followed his Gabonese charge all the way across his own penalty-area to successfully narrow the shooting angle.

And so West Ham extracted the maximum from an even game of few chances, gaining a measure of revenge for August’s reverse fixture, from which Arsenal’s 3-1 win was totally unreflective of the balance of play. Pellegrini limited his side to the counterattack on that occasion, perhaps owing to his then-midfield pairing of Carlos Sanchez and the perma-crocked Jack Wilshere. But now, just five months on, the Chilean’s desire to instill a ‘big team mentality’ into his Hammers looks well on its way to fulfillment. West Ham enjoyed the lion’s share of possession here before their 48th-minute winner, and were never cowed by an Arsenal side that engage the opposition higher than any of their Premier League peers. Only the imminent departure of star striker Marko Arnautovic, whose body language left a lot to be desired, looks likely to slow the Hammers’ roll.

Seventh spot, therefore, is now well within Pellegrini’s reach: provided, of course, he’s put this 4-4-2 nonsense firmly behind him.