If the league insists on jamming eight fixtures into the first five weeks, non-events like this one are a given. Monday’s Markets Field clash had nil-all written all over it before Shaun Kelly’s ill-timed lunge at Ronan Finn. But lunge the full-back did, handing Shamrock Rovers a second consecutive scrappy win. 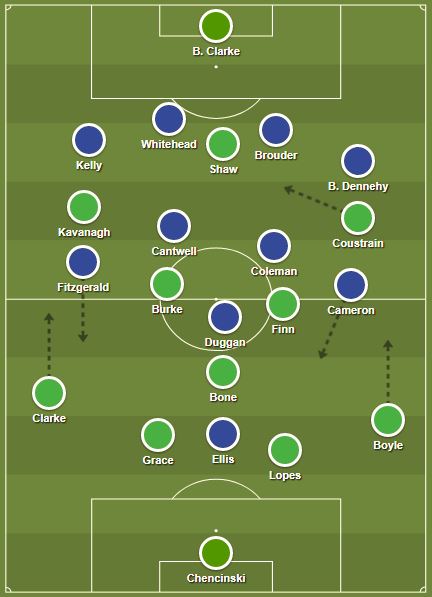 Intensity was notably, and understandably, absent from both sides’ play. Rovers, in particular, have pressed high and hard at home to Bray Wanderers and away to Cork City. Not so here.

Limerick too upped the passivity stakes. Tommy Barrett’s side were happy to sit off and allow Rovers the ball in benign areas. Happily for Super Blues fans, the gaps opened by February’s catastrophic Oriel Park low-block were closed.

Compactness was the order of the day for Limerick, then. And Rovers, as keen to play through midfield as ever, found no way through.

Ronan Finn, by his own admission a part-time footballer these days, found himself particularly put out by Cian Coleman’s ever-present effervescence. So much so that the Hoops captain, initially fielded on the right of a central-midfield three, was moved to escape his minder’s clutches.

Finn swapped positions with Graham Burke after half-time; hence that penalty-winning run. That was as good as it got for the former Dundalk midfielder, however.

Finn has yet to recapture the heights of 2016 in his new Tallaght Stadium environs. Having his pocket picked by Connor Ellis, in the lead up to Coleman’s second-half effort, rather summed up his evening.

Handing the armband to a player with one eye on life after football is, in hindsight, a curious decision from Stephen Bradley. But, then, the Hoops supremo’s transfer market dealings have hardly set the world alight.

Joel Coustrain, last seen at amateur side Ballynanty Rovers after at least one failed trial with Limerick, was an odd pick-up. The Ardnacrusha native didn’t exactly help his captain’s cause either, fruitlessly running into Finn’s zone onto his favoured left foot. Brandon Miele, rested for Friday, was dearly missed.

The overlaps of Simon Madden, once of the Tallaght parish, would have come in handy, therefore. But Bradley wanted the relatively agricultural Ethan Boyle instead; for some reason. Both Boyle, and safety-first Sam Bone, look like square pegs in a side that’s apparently built to play progressive, possession-based football.

Gary Shaw, too, continues to look a fish out of water. With a midfield primed to play through balls, and a plethora of low crosses coming his way, the 25-year-old target man was often caught on his heels. Both he, and Limerick’s Ellis, front sides designed to play a style of football completely anathema to them.

Limerick’s Killian Brouder, making his first senior league start, was, therefore, let off the hook. Movement into the channels, from a more mobile striker, would have posed a far greater challenge to the novice defender.

While Dan Carr, last of Sweden’s fourth tier, may not be the answer, the Englishman at least seems to suit Bradley’s chosen style better than Shaw. Ellis, meanwhile, has little of the hold-up game or aerial prowess required to fit Barrett’s more rudimentary approach.

Elsewhere, on Rovers’  left flank, Sean Kavanagh and Trevor Clarke had designs on targeting Kelly. With Shane Tracy removed from the line of fire against Cork, and now injured, opposition sides have turned their attention to Limerick’s other unathletic full-back.

But, thanks to the dual efforts of Kilian Cantwell, and the impressive Will Fitzgerald, Kelly’s blushes were spared. Fitzgerald’s ongoing battle with Clarke was a joy to behold. What a shame the 18-year-old wasn’t given more time to run at Boyle, instead of the feckless Henry Cameron.

Ultimately, this game was the kind of lo-fi, nullification exercise in which no individual gains an advantage over any other. Only an error could separate the sides. Mishap-happy goalkeeper Tomer Chencinski did his best, booting the ball off Fitzgerald in the 10th minute. Lee Grace’s saving challenge spared his stopper’s blushes.

There was no saving Kelly’s bacon, however, once Burke slotted his spot-kick home. Justifiably released last summer by Neil McDonald, there appeared no good rationale behind his January return.

A stint alongside Coustrain at Ballynanty was, patently, not taken seriously. That episode, and tonight’s inexplicable error, are inexcusable from a player of such vast experience. Barrett may come to regret this one; excuses about a right-back drought do not wash. Cork, who admittedly saw the best of Kelly on Friday, signed three of them this winter.

Still, some gems have been unearthed, in the shape of Cantwell and Billy Dennehy — to name but two. Bradley must marvel at such a hit-rate. Barrett is, after all, already streets ahead of his UEFA Pro Licence classmate in that regard.