The learning pathway was always bound to be a bumpy one for 38-year-old Tommy Barrett. Thrown in at the Limerick FC deep end, with no senior management experience, the eviscerations Barrett suffered in Dundalk and Derry were not exactly unexpected. 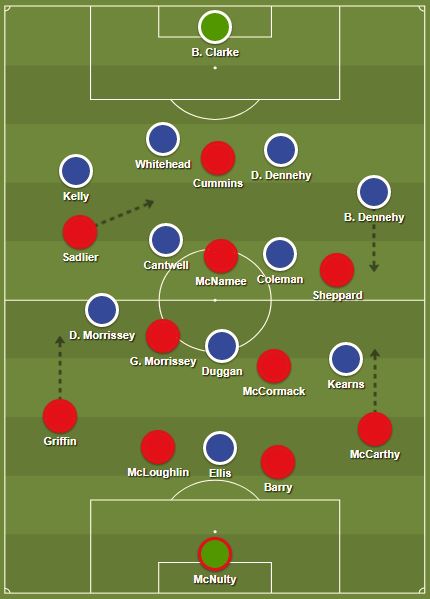 This result, however, was anything but predictable. Just four days after Barrett damned his side for downing tools in the Brandywell, Limerick again displayed an admirable degree of bouncebackability. And their manager, more importantly, evinced a heretofore hidden degree of tactical intelligence that may yet save the Super Blues’ 2018 bacon.

Outfoxing the infinitely more experienced John Caulfield is no mean feat. But Barrett managed it here, thanks to three brave strategic calls.

Along the way to shipping 14 goals to date, a league-high, three major defensive deficiencies became glaringly apparent. A pair of unathletic full-backs, in Shaun Kelly and Shane Tracy, were always ripe for opposition targeting.

Positional errors in central midfield, mostly committed by Eoin Wearen and captain Shane Duggan, helped the opposition’s cause. And a systemic lack of compactness, when sitting off more-fancied enemies, created gaping holes for Limerick’s foes to prance through.

Faced with the visit of the champions, sitting pretty already with 12 points out of 15, Barrett acted appropriately — in fact, he patched all three wounds perfectly.

Tracy, who watched on as Ronan Hale helped himself to a hat-trick and one assist on Monday, was mercifully removed from the firing line.

Former Cork winger Billy Dennehy successfully deputised at left-back, even leaving aside his stunning solo opener. The 31-year-old continually foiled Karl Sheppard, outmatching the wide forward’s athleticism in both halves of the pitch.

Wearen’s injury-enforced absence exacerbated Barrett’s second major conundrum; the central midfield problem. But rather than plop Duggan in there, and risk repeating the captain’s disastrous showings in Dundalk and Derry, Kilian Cantwell was asked to partner Coleman.

Cantwell’s inclusion proved a particularly inspired decision. Kelly, destroyed by Sadlier in the Showgrounds last May, had himself a more than able second.

Cantwell’s presence also helped Barrett solve his third, and final, big problem too — that gappy low-block. A complete disaster in Dundalk, Barrett simply dropped it, preferring instead to engage the opposition in midfield. Duggan, freed of responsibility in his now-customary ten role, led the charge.

Both Cantwell and Coleman more than matched their captain’s energy. Even Danny Morrissey, another beset by chronic fitness issues, came off the line to harry Cork’s error-strewn midfield. Only Daniel Kearns, who comprehensively lost his individual battle with the impressive Conor McCarthy, let the side down.

Neither Gearoid Morrissey, nor the oft-enraged Conor McCormack, enjoyed any real time on the ball. Misplaced passes, and inadvertent touches, were de rigeur. Both Graham Cummins and Barry McNamee were starved of service. Sadlier began to drift infield, away from Kelly, to find the football — music to Limerick ears.

Caulfield had to wait until after the break to watch his side enjoy a protracted period of possession and pressure. Only then could full-backs, McCarthy and Shane Griffin, advance with any regularity.

Griffin was central to both of Cork’s second-half chances, squaring for Sheppard on 66 minutes, and drawing a last-ditch tackle from Kelly on 69. It is perhaps a testament to Caulfield’s innate sense of reserve, however, that the full-back did not become a more permanent fixture in Limerick’s defensive-third.

Regardless, Cork were starved of the natural attacking width required to break home resolve. Sadlier’s insistence upon playing into host hands, by continuing to take up positions infield, didn’t help matters.

After winning five first-half corners, one of which coughed up the Leesiders’ spot-kick equaliser, none followed after half-time.

Caulfield’s inaction was criminal. It took 80 minutes for the City supremo to enact a tactical change; Cummins partnered with 18-year-old Michael Howard in a 4-4-2. The Preston loanee’s familiar-sounding name was apt, evoking the defining adjective of his party leader’s performance here — conservative.

For Barrett, however, only one descriptor seemed fitting — transformative.