Although Liverpool’s press earned Jurgen Klopp’s side a half-time lead, their subsequent second-half retreat, paired with the introduction of Marouane Fellaini’s aerial threat, ultimately allowed Manchester United to save a late point. 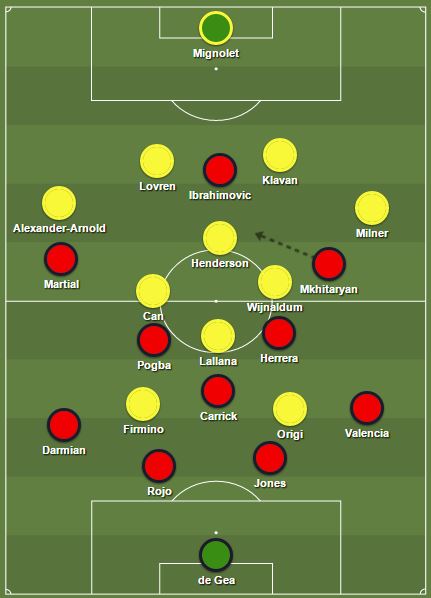 Klopp’s surprising switch to a 4-3-1-2 formation, a rare deviation from Liverpool’s usual 4-1-4-1 shape, opened the door for United to make hay in wide areas.

However, although Mourinho’s selection was more positive than the eleven that featured Ashley Young in the stultifying reverse fixture, the hosts were still the more reserved of two fairly circumspect sides prior to James Milner’s opener.

Although free of direct markers, due to the absence of any Liverpool wingers to keep tabs on, Matteo Darmian and Antonio Valencia both rarely advanced beyond their respective wide colleagues in the first-half.

The marginally more positive of the two sides, Liverpool’s press paid a rich dividend in the 27th-minute, when Roberto Firmino dispossessed Phil Jones and earned the corner-kick that set-piece calamity Paul Pogba attempted to punch away from tormentor Dejan Lovren.

Retreat after Milner dispatched the resultant spot-kick was inevitable, and Ragnar Klavan’s failed attempt to catch Henrikh Mkhitaryan offside, despite the absence of any pressure on provider Ander Herrera, showed how unaccustomed Klopp’s busy side have become to such a laissez-faire approach.

Mkhitaryan’s infield drifts paved one of the few navigable attacking avenues for United, and Pogba should have converted the Armenian’s through-ball when Alexander-Arnold’s Martial-inspired under-covering opened up the inside-left channel to the French midfielder.

United change shape…and so do Liverpool

Poor to adjust to a front-foot approach, that chance aside, the half-time introduction of Wayne Rooney in place of holding midfielder Michael Carrick boosted United’s attacking numbers by one, but freed Adam Lallana and risked miring Phil Jones and Marcos Rojo in a dicey 2-v-3 counter-attacking conundrum in the process.

That risk was nullified by Klopp on the hour-mark however, when the German responded to a 15-minute spell in which United pinned his side back by dumping the more possession-oriented diamond, and reverting to the more context-appropriate 4-1-4-1.

Divock Origi departed in favour of Philippe Coutinho to facilitate this change, which carried the added bonus of immediately improving Liverpool’s collective ability to retain possession and release pressure.

As the visitors’ defensive-line drifted ever deeper, Mourinho turned to his most obvious available aerial target for his final tactical gambit, introducing Marouane Fellaini in the number 10 position, with Rooney shunted out left, and Mkhitaryan filling in for the hooked Darmian at left-back.

Despite the folly of United’s initially overly-direct, and panicked, approach, Fellaini’s presence eventually paid off when the Belgian beat a rattled Klavan to a Rooney cross, indirectly teeing-up Zlatan Ibrahimovic’s headed equaliser. Rooney, incidentally, had beaten Alexander-Arnold on the outside to give Fellaini the service he required.

In stark contrast to the game’s bemusing opening passages, that leveler spurred a refreshingly end-to-end final nine minutes, during which United reverted to fruitless long balls, and Coutinho created a huge counter-attacking chance that Wijnaldum failed to snaffle.