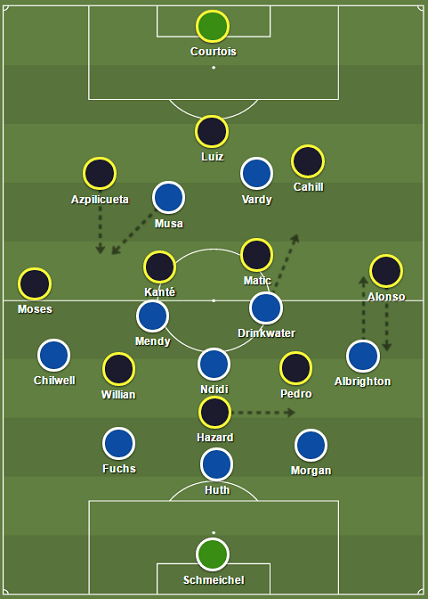 Like Manchester City, Tottenham Hotspur, and Everton before them, Claudio Ranieri responded to the questions posed by Antonio Conte’s 3-4-2-1 system by switching to a back-three of his own.

However, unlike City and Spurs, whose copycat shapes allowed their players to press man-for-man and dominate possession, the Foxes instead aped the 3-5-2 system opted for by the ill-fated Toffees — with support striker Ahmed Musa dropping to the left-flank in the defensive phase.

Employing the Nigerian in this manner — effectively creating a 5-4-1 shape in defence — was surely an effort to avoid the five-goal tonking dished out to Ronald Koeman’s side, who saw their wing-backs pinned when Chelsea’s four-strong central midfield cohort overran the Dutchman’s central midfield.

Alas for Ranieri, this cautious measure neglected the threat posed by Chelsea’s oft-advancing right-sided centre-back Cesar Azpilicueta, who was left free to deliver the cross that spurred Marcos Alonso’s opener.

Leicester’s right-wing-back Mark Albrighton, a winger-by-trade, was beaten by Pedro to the Spaniard’s back-post cross, and the former Aston Villa man consistently failed to deal with Chelsea’s relentless left-wing focus in the opening fifteen minutes.

But tempting on a Leicester side, that were initially extremely reluctant to abandon their own counter-attacking approach, eventually released the wing-back to make his mark in the Chelsea half.

Buttressed by Danny Drinkwater’s regular forays wide, Albrighton’s pinpoint crossing led the Foxes’ right-wing charge for an equaliser, that may have actually borne fruit had Musa not been positionally hampered by his defensive instructions.

Eschewing this halfway-house role for the former CSKA hitman saw Leicester emerge for the second-half in the 3-4-2-1 clothes of their visitors — with Musa and Drinkwater backing up Jamie Vardy in the inside-forward roles.

Ranieri, dubbed the ‘Tinkerman’ in honour of his tactical ADD at the helm of Chelsea, has oscillated wildly from system to system since finally abandoning the 4-4-2 earlier this season, and the Italian gave this one all of 15 minutes before responding to Alonso’s second goal by replacing Robert Huth with Shinji Okazaki.

The Japanese’s introduction heralded the institution of a 4-3-2-1 formation, with newcomer Wilfried Ndidi back in the holding role, and Drinkwater resuming the central midfield role in which he started the game.

This tactical incoherence from their Italian manager, whose side also flirted unconvincingly with a diamond formation in the scoreless draw against Middlesbrough a fortnight ago, was unlikely to help Leicester pierce the Premier League’s second-best rearguard and spark a famous comeback.