Writing this piece just minutes after a turgid encounter between last season’s top-two finishers, it’s difficult to escape the suspicion that this season’s edition of the English Premier League is going to be a tough watch. 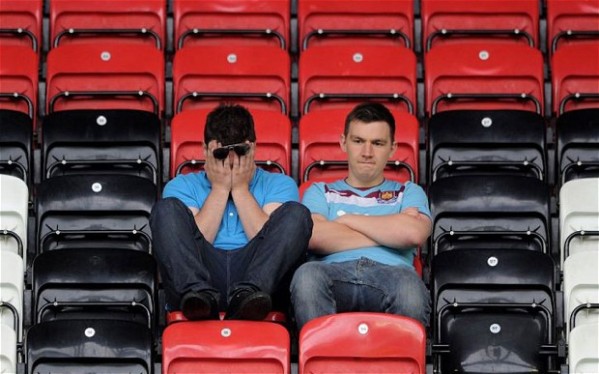 Leicester City’s improbable 2015/16 title triumph, built on a simple foundation of compact defending and quick counter-attacking, was always going to produce a response from the division’s traditional elite. The ease with which the Foxes prevailed upon systemic structural deficiencies, particularly evident at defensive transitions, was unlikely to happen again.

Few, least of all this observer, expected that response to be so quick and all-encompassing, as two days of marginally-watchable televised football peaked with Leicester’s eye-wateringly dull scoreless draw against Arsenal.

Arsene Wenger’s 4-2-3-1, as in their season opener at home to Liverpool, featured two defence-oriented holding midfielders, with new signing Granit Xhaka joining Francis Coquelin at the base of midfield in place of Mohamed Elneny. Notwithstanding his lucky escape for a second-bookable offence against Riyad Mahrez, that Coquelin was the game’s most influential player speaks volumes about the contest’s quality.

Coquelin and Xhaka, who committed three fouls in his first 18 minutes of Premier League football last weekend, both held their positions when their side advanced, rendering both successful Arsenal attacks and fruitful Leicester counter-attacks equally unlikely. Cold war only developed into outright hostilities when Wenger replaced the Swiss with Jack Wilshere for the final quarter-hour.

Wilshere, who likes to dribble with the ball from deep and make third-man off-the-ball runs, immediately changed the dynamic of the game, reaching the byline to send in a dangerous cross that Danny Simpson had to scramble to clear at the back post. Claudio Ranieri, sensing an opportunity, then swapped reliable left-sided midfielder Marc Albrighton for record signing Ahmed Musa, who should have been awarded a penalty for Hector Bellerin’s 88th-minute foul.

Petr Cech’s injury-time save from Mahrez represented the champions’ only shot on target of the evening, underlining what an unedifying spectacle the game had been until its closing moments.

Wenger’s decision to plump for two out-and-out holders in central midfield is not unique. New Chelsea manager Antonio Conte has selected both N’Golo Kanté and Nemanja Matic to play in a cautious 4-3-3 against both West Ham United and Watford. Although Oscar, ordinarily fielded as a number ten, is the other central midfielder, he too is instructed to hold his position when the Blues are on the attack.

Conte’s 100% points haul is a fortunate one, with both victories at least partly attributable to Michy Batshuayi, whose arrivals off the bench coincided with switches to Conte’s favoured 4-2-4 system on both occasions.

Although both Manchester clubs stand not guilty of this particular selection quirk, José Mourinho and Pep Guardiola have also prioritised defensive structure over attacking abandon since their summer arrivals in the north-west.

In Mourinho’s case, this is far from a surprising development. The Portuguese’s success has long been built on the foundation of impeccable defensive structure, which usually goes hand-in-hand with devastatingly effective attacking transitions.

So far at Manchester United, Mourinho seems to have bedded in the former, with the latter very much a work in progress. Victories over Bournemouth and Southampton have seen the former Chelsea coach bed in his preferred zonal marking system, in which his side are instructed to quickly form two defensive banks of four and look to intercept the ball in their own half.

Louis van Gaal’s insistence upon man-marking and pressing in the central midfield zone have been unceremoniously dumped, but the tepid attacking transitions of his reign are still painfully evident. Of Mourinho’s chosen front four for the opening two fixtures, only Anthony Martial offers any real pace, with the front-line combination of Zlatan Ibrahimovic and Wayne Rooney looking decidedly languid.

As such, although United have successfully limited opponents’ attacking opportunities (Southampton managed only one shot on target on Friday night, for all their possession), they have relied almost exclusively on individual errors – or Zlatan’s individual brilliance – to create openings of their own.

At least Mourinho has released the restraints on full-backs Antonio Valencia and Luke Shaw, with both playing integral roles in a goal apiece during Friday’s victory. Meanwhile, across town, Guardiola’s utilisation of Manchester City’s wide defenders illustrates his own structural fixation.

This 2-3 defensive buttress allowed central midfielders David Silva and Kevin de Bruyne to attack freely, but rendered the side at large undermanned in the attacking phase.

On Saturday afternoon, away to Stoke, Guardiola surprised many by changing tack, fielding a more conventional 4-1-4-1 formation with full-backs Pablo Zabaleta and Aleksander Kolarov maintaining their wide positions – perhaps as a response to Mark Hughes asking his wide players, Marko Arnautovic and Bojan, to stay high in the defensive phase.

Nonetheless, City remained circumspect in attack, relying on a penalty and an indirect free-kick to open up a two-goal half-time lead. Indeed, Guardiola’s charges only really threatened from open play upon the introduction of Kelechi Iheanacho, when Stoke were over-committing to rescue a point.

Bucking this division-wide trend towards caution is Liverpool manager Jurgen Klopp, who continues to favour chaos over control. Last weekend’s madcap 4-3 victory over Arsenal, in which his side profited from a callow centre-back pairing rather than any real structural deficiencies, is likely to be anomalous when all the clashes between the traditional ‘big sides’ are said and done.

Klopp’s continued central midfield selection of Georginio Wijnaldum and Adam Lallana, who barely won a tackle between them at the Emirates, is a risk unbefitting of his preferred high-pressing style. Backing them up with Jordan Henderson in the holding role is not the most structurally sound of solutions either, meaning that Burnley’s counter-attacking 2-0 victory over Liverpool was hardly a surprise.

Although ultra-popular with Liverpool fans, owing greatly to transparent stunts like refusing to converse with The Sun’s reporter at a recent press conference, the German’s record at Anfield has underwhelmed thus far, while the injury-list has expanded in response to his ‘heavy metal’ ethic.

Last season’s chaotic Europa League final sums up Klopp’s reign to date. If he continues in the same vein, against the tide with which his contemporaries are swimming, bored Premier League watchers will send their gratitude his way. Silverware and a prolonged stay in the Anfield hotseat, however, are extremely unlikely to follow.