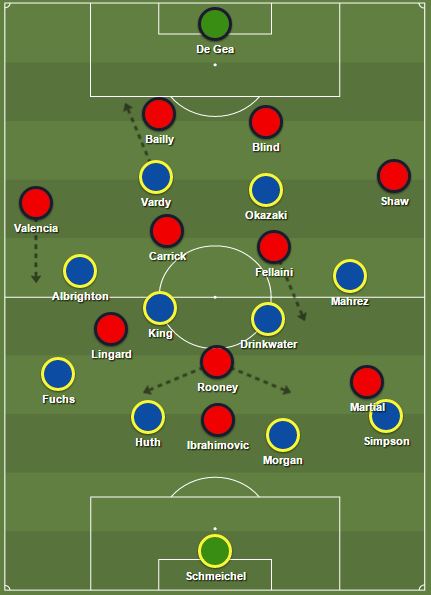 Starting line-ups; Fellaini moved into a left-of-centre number 10-ish position to challenge for goal-kicks, while Rooney drifted wide from his starting position. Vardy surprisingly chose to mostly play up against Bailly, rather than the one-paced Blind, in the inside-left channel

United’s maiden performance under Mourinho was almost indistinguishable from the kind that pervaded throughout the tenure of his predecessor, Louis van Gaal. The selection of the aerially-dominant Marouane Fellaini in central midfield evoked not-so-fond memories of the risk-averse Dutchman, and suggested that his Portuguese successor was wary of the reigning league champions’ set-piece prowess.

An opening half-hour in which both sides competed to play on the break confirmed Mourinho’s safety-first mentality. Ultra-compact as ever, Claudio Ranieri’s side were more effective at winning the ball in midfield and breaking quickly; the 2015/16 season’s top interceptors completed 15 in the first half, while United only managed one.

The Foxes’ counter-attacking threat was further aided by poor ball retention down the spine of United’s team. Neither Fellaini, nor Ibrahimovic, nor the captain Wayne Rooney managed to complete 80% of their attempted passes, with the debuting Swede particularly culpable. Ibrahimovic was also dispossessed, either by an opponent or through a poor touch, seven times; only the disappointing Riyad Mahrez outstripped him, with a tally of eight.

The choice of Ibrahimovic at number nine, paired in behind with the comparatively languid Wayne Rooney at number 10, meant that Leicester felt comfortable enough to employ an unusually high defensive line by their standards, rendering them even more compact. The 34-year-old Ibrahimovic’s attempts to exploit the resultant space in behind were pathetic, with his early runs – designed to compensate for his lack of pace – rendering him caught offside on several occasions.

Indeed, United’s 32nd-minute opener, for which right-winger Jesse Lingard ran through three Leicester challenges in the centre of the pitch, demonstrated exactly the kind of direct, penetrative play that an Ibrahimovic/Rooney partnership sorely lacks.

Out of possession, the United captain’s performance was even more disastrous. Despite finishing the game with a possession share of 42%, Leicester managed the unlikely feat of boasting the game’s most prolific passer. The player in question was the Foxes’ deep-lying playmaker Danny Drinkwater, who was gifted the freedom of the Wembley turf by Rooney to exercise his impressive passing range.

Drinkwater twice teed up Jamie Vardy down the inside-left in the first half, where the lightning-quick striker gave the debuting Eric Bailly a torrid time. Bailly’s rashness cost him two one-on-one battles with Vardy in the opening 20 minutes; the first required a last-man tackle from Daley Blind to prevent a goal, while the second resulted in an Okazaki strike deflecting just wide of David de Gea’s goal.

Bailly’s 71st-minute booking was earned for chopping Vardy down on the left wing, after Rooney stood and watched Drinkwater play yet another channel ball for his striker. It was difficult not to recall Sir Alex Ferguson berating the then 25-year-old, after a half-hour of the 2011 Champions League final, for completely failing to mark Barcelona’s Sergio Busquets; Ferguson’s decision to omit Rooney for his last European game against Real Madrid dated back to that loss of trust.

By that point in the game, Fellaini’s underhit backpass had brought the game to parity again. Although this underlined how poor the Belgian was in possession, Fellaini did at least fulfill the presumed rationale for his selection, successfully contesting eight aerial duels; six more than any other player. Indeed, United – through Ibrahimovic – should have scored when Fellaini rose first to flick on a 79th-minute corner.

There were at least two positives for United to take from their eventual winner. The restraints that van Gaal placed upon his full backs would have rendered the type of attacking ambition shown by Antonio Valencia unlikely during the previous regime.

The Ecuadorian skinned Demarai Gray, who has work to do on the defensive side of his game if he is to unseat Marc Albrighton, before standing it up for Ibrahimovic to probably become the first player to beat Wes Morgan in an aerial duel in a very long time! United, remember, were the team with the third fewest headed goals in last season’s Premier League; progress.

Mourinho had little time to feel optimistic as the closing minutes drove home the magnitude of the task at hand. United’s set-piece vulnerability, hinted at when Okazaki hit the bar with a near-post first half header, fully reared its ugly head as they desperately tried to deal with Luis Hernandez’s long-throws. Ahmed Musa’s back header and Gray’s strike – that may or may not have struck a United hand – both stood as genuine near-misses for the ultimately defeated Foxes.