Ralph Hasenhüttl has performed miracles before. In under three years, the gregarious Austrian transformed lowly Ingolstadt from second-tier relegation fodder to a mid-table Bundesliga force; no mean feat by any man’s standards. But even Hasenhüttl must have been shocked by the speed with which he reinvigorated Southampton in Mark Hughes’ grumbling wake. Two wins in his first three games, claiming Arsenal’s 22-game unbeaten scalp in the process, suggested the Saints had taken to his high-pressing doctrine like ducks to water. Who could blame him for getting carried away? 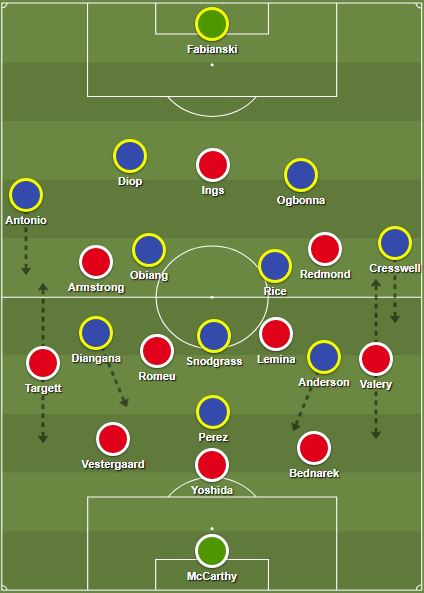 Inculcating a new, hard-running style in the teeth of a festive fixture crunch was never likely to be that easy, however. And Nathan Redmond, speaking in the direct aftermath of this capitulation to West Ham United, was hardly inclined to mask that uncomfortable fact. “Maybe it’s the volume of games at the moment. It’s rest, recover, play, rest, recover. Maybe we were a bit leggy in terms of pressing,” said Redmond. No arguments here.

Admittedly, for 15 minutes or so, Hasenhüttl’s high-press did indeed trouble the Hammers. Penned in by the Saints front-three, and reduced to using Michail Antonio’s head as an out-ball, Manuel Pellegrini’s harried defence looked extremely uncomfortable. Issa Diop, prised from his usual Paraguayan partner Fabien Balbuena, appeared particularly discommoded by the pressure. The 21-year-old’s composure deserted him completely, as the likes of Danny Ings nipped continually at his heels. Ings, profiting from the resultant chaos, probably should have opened the scoring from a 2nd-minute chance he himself manufactured through sheer force of will.

Having withstood that initial wave, however, West Ham proceeded to dominate the remainder of the first-half. Injuries to Pablo Zabaleta, Javier Hernandez and Marko Arnautovic had forcibly steered Pellegrini away from his favoured 4-4-2, a system that looked all too brittle in recent weeks. The Chilean therefore bestowed upon Pedro Obiang a belated recall to the side, but not within the more-balanced 4-3-3 in which the African midfielder had shone earlier this season.

Instead, Pellegrini — perhaps loth to play the lightweight Lucas Perez as a lone striker — opted to use Robert Snodgrass as a number-10 in a 4-2-3-1. Obiang, alongside the breathtakingly composed Declan Rice, offered some robust rearguard protection, easily evading the Saints’ waning press before picking out the Scot between the lines. Snodgrass duly dictated the game’s second-quarter with distinction, allowing West Ham to punish the other glaring hallmark of Southampton’s evident fatigue: shoddy defensive transitions.

Encouraged to press from the head of Hasenhüttl’s 3-4-2-1, both Redmond and Stuart Armstrong lacked the legs to regularly run in the opposite direction. Southampton’s defensive shape, therefore, was often threadbare, leaving Oriel Romeu and the half-fit Mario Lemina unflanked in front of their defence. Neither West Ham inside-forward capitalised on this space, though as Felipe Anderson continued where he left off against Watford and Grady Diangana showed all his inexperience. But Pellegrini’s full-backs were unwilling to miss the same trick.

Perez, shanking one with his supposedly stronger left foot, should have finished an Aaron Cresswell centre. And Michail Antonio, deposed from centre-forward to deputise for Zabaleta, bundled past Matt Targett and Romeu at every available opportunity. Fearsome in the air and possessing of significant reserves of strength, it’s such a shame that Antonio is so lacking in the technical department. As such, the Hammers failed to turn their wide superiority into goals before the break.

They need not have worried, however. Rather than retrench after watching his side wilt for a half-hour, Hasenhüttl instead doubled down on his initial high-pressing intentions. In a repeat of his mid-game gambit against Arsenal, the Austrian reconfigured his side into a 3-5-2 shape at half-time, designed to allow his players to press man-for-man: Redmond and Ings up against Angelo Ogbonna and Diop; Armstong and Lemina up against Obiang and Rice; Romeu up against Snodgrass.

A sound idea on paper, sure, but it didn’t pay off this time: precisely because it ignored the exhausted elephant in the room. The Saints improved briefly, certainly, but their ultra-fortunate opener owed everything to another botched Diop clearance and Diangana’s generosity in playing their entire attack onside. Redmond’s eventual handball finish wasn’t noticed by the officials, but everyone picked up on the Lukasz Fabianski double-save that preceded it; heroics that are nothing new since the Pole’s cut-price summer arrival.

Diangana also allowed Targett to win the initial header from Lemina’s cross, and the teenager still has a lot to learn if he is to make it at this level. In that regard, West Ham were fortunate that Ryan Bertrand still sits on the treatment table; Targett, although a game lad, is simply not possessing of the England full-back’s attacking-third attributes.

Nor, for that matter, is the inexperienced Yan Valery, who wasn’t exactly tracked assiduously by the typically languid Anderson. Still, at least the Brazilian rediscovered his attacking mojo in the second-half, punishing Hasenhüttl’s failure to curb the Saints’ pressing enthusiasm. Reducing his midfield headcount from four to three backfired spectacularly on the Austrian, as Anderson arced a wonderful finish past Alex McCarthy from the very inside-left zone Redmond once nominally filled.

And, right on the hour-mark, Anderson wrapped up the game, when Hasenhüttl’s baffling decision to leave just one player back at an attacking corner spectacularly blew up in his shellshocked side’s faces. Only Antonio’s pinpoint through-ball assist inspired greater surprise than Hasenhüttl’s inexplicable abandon.

Five wins out of six, then, for the resurgent Hammers, who benefited hugely from Pellegrini’s restoration of a three-man midfield. Cresswell, too, justified his long-overdue inclusion at the expense of Arthur Masuaku; Redmond, a force to be reckoned with in recent weeks, barely got a look in. However, neither Perez nor Bambi-on-Ice homager Andy Carroll, looked anywhere near the part; hurry back, Arnautovic.

As for Hasenhüttl, the so-called “Alpine Klopp”, he would do well to learn from his former classmate’s mistakes. The Liverpool manager, who took his coaching badges at the same time as Hasenhüttl, has finally learned the value of restraint this season; the Reds have moderated their pressing zeal when appropriate, along the way to leading the pack with just seven goals conceded. Both managers come from the same gegenpressing school, but the German is in the midst of updating the curriculum. Hasenhüttl, take note.