Speaking on Monday afternoon, Martin O’Neill rubbished suggestions that several players played out of position throughout Saturday’s deadlock with Denmark. “The only player we had playing in a position where he doesn’t normally play is Cyrus Christie, and he was man of the match,” he said. Perspective, of course, is all relative; Christie, in the eyes of most, looked all at sea in an unfamiliar central midfield role.

Awarded man of the match for, presumably, exacting Ireland’s only shot on target, the Fulham full-back was one of four square pegs crammed into round holes against the Danes; Callum O’Dowda, Harry Arter and James McClean the others. Their number dwindled to three against Wales on Tuesday, but they still let their side down — thrown to the wolves by an incompetent manager long past his sell-by date. 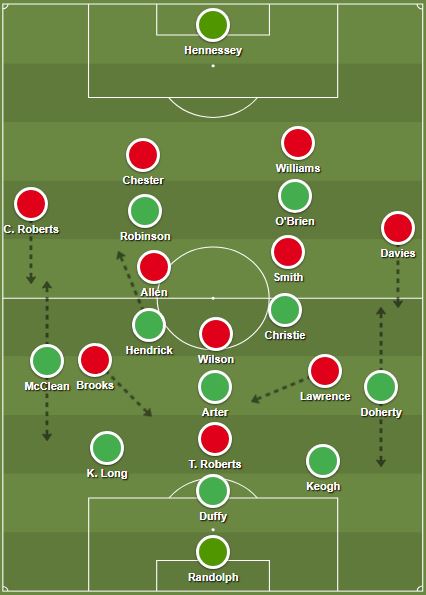 Wales, in truth, were there for the taking. Robbed of both Gareth Bale and Aaron Ramsey for the first time in 10 years, Ryan Giggs’ side were also coming off the back of a bruising 4-1 reverse to Spain. A brief dalliance with 3-5-1-1, a la O’Neill, was so disastrous it was shelved after half-time.

Unsurprisingly, therefore, Giggs reverted to a back-four for this one, opting for the same narrow 4-2-3-1 that vanquished Ireland last month. But, with wunderkind playmaker Ethan Ampadu also absent due to injury, Wales struggled to replicate that fluid, tiki-taka-infused performance.

Currently on loan in the Dutch second-tier with FC Twente, Manchester City’s Matthew Smith — like Ampadu, also 18 — proved an ineffectual deputy for his fellow teenager. Coupled with the higher press O’Neill promised on Monday, this spelled danger for Wales’ defence, who struggled to find safe passing lanes through which to move the ball forward. And Smith, unlike his midfield partner Joe Allen, did little to accommodate them with positional variation. Nor did Giggs’ incredibly youthful front-four (average age: 21.25), each of whom turned in disappointing performances at the Aviva Stadium on Tuesday.

It was Smith, too, that took the heavy touch upon which Christie pounced. For the third time in three games against Ireland, the Welsh felt the shame of falling victim to one of O’Neill’s patented one-man pressing sorties. Backed up by no-one in particular, Christie capitalised on some good fortune, but wasted the game’s only clear-cut chance with an easily savable strike. Christie, by the by, was dispossessed more than any other other player on the pitch; for the second consecutive game.

Still, at least Ireland were trying to engage the opposition higher. Three days prior, against Denmark, the permanent depth of their defensive line allowed Thomas Delaney and Lasse Schone to run the show. Both Danish central midfielders comfortably topped the passing charts, as O’Neill’s ill-prepared side failed to implement his “front foot” wishes. Wales, too, won the passing: but only with all four defenders leading the way. Allen was fifth, completing just 26.

Unfortunately, Ireland’s attacking exploits did not enjoy an uptick commensurate with their improvement off the ball. Statistically speaking, things looked good on the surface: five shots on target, up from one against Denmark, for example. But, in reality, O’Neill employed the same “primitive” kick-and-rush approach in possession, befitting the pejorative Denmark’s Delaney assigned it last weekend.

Aiden O’Brien, in for a fatigued Shane Long, won roughly half of his aerial duels with Ashley Williams. And Callum Robinson, in for the concussed O’Dowda, even managed to get on the end of some of the second-balls, too. Playing closer to O’Brien, helping to form more of a 3-5-2 than a 3-5-1-1, Robinson worked the pocket of space behind Allen exceedingly well. Wales’ centre-back pairing, comprised of Williams and James Chester, looked uncomfortable in the face of a genuine strike partnership. And, as a result, full-backs Ben Davies and Connor Roberts evinced a more restrained outlook.

O’Neill’s wing-backs, therefore, had space into which they could advance. And with second-balls falling their side’s way, they could often do just that. Pinned to their centre-backs against the Danes, both McClean and Matt Doherty suddenly enjoyed new-found freedom. But McClean, technically awful as ever, proved particularly wasteful, despite working his way into eight crossing opportunities.

Most of the Stoke winger’s deliveries were predictably poor, and only Wales’ Tyler Roberts undershot his criminally-low 61% pass completion rate. Admittedly, McClean did quieten 21-year-old sensation David Brooks, taking it in turns with Kevin Long to kick lumps out of the disappointing Bournemouth midfielder. But the primitive poppy-eschewer again lost his head when many around him were keeping theirs.

“James is obviously sometimes not right in the head but he’s absolutely brilliant for us and he epitomises everything that this side has been about for the last few years,” said O’Neill on Monday, of the player upon whom he has bestowed more international caps than any other. But another stupid yellow card, inevitable after two early fouls, fulfilled the first part of that tribute in spades.

Letting Connor Roberts go in the lead-up to Wales’ free-kick winner was much less forgivable, however. When fielding a 3-5-2 system against 4-2-3-1, the freedom afforded to the opposition’s full-backs is the primary concern. Overloads in wide areas can prove one’s undoing if the pendulum of possession is swinging in the wrong direction. So it eventually proved here.

As Wales reasserted their early dominance after half-time, both Roberts and Davies enjoyed more time in the opposition half. The tables turned, Roberts took full advantage, running off McClean to draw a lunging challenge from another fish-out-of-water, Harry Arter. Arter has never looked comfortable in O’Neill’s deepest midfield role, enduring horror-show performances in Tblisi — and twice against Denmark — during the last campaign.

The Cardiff City midfielder, more of a ball-winning number-eight than a natural holder, managed precisely zero tackles and zero interceptions here. Two fouls were bagged, however, including the one that teed up Harry Wilson’s decisive free-kick. Darren Randolph, whose stint as a Premier League goalkeeper with West Ham did not exactly go swimmingly, should have done better.

Predictably, O’Neill lost his head from that point on, as he did so famously against Denmark one year ago. Ireland ended up with three strikers on the pitch, in something resembling a 4-3-2-1 formation, opening up the game for Wales to waste two clear-cut counterattacking chances. Chester also missed a gilt-edged set-piece chance from — you guessed it — a poorly-defended short-corner. Allen and Wilson worked the same two-on-one that did for Ireland against Denmark last year, and against Scotland four years ago.

Ad-hoc to the last, O’Neill’s last throw-of-the-dice again saw Shane Duffy promoted to the frontlines. But, by this point, Giggs had wisely introduced a third centre-back (Chris Gunter) to counteract Ireland’s newly-minted front three. Giggs did unwisely appear to operate with a 5-2-2-1 system in the closing stages, however, with neither George Thomas nor Tom Lawrence helping to form a midfield four in the defensive phase. The trio of Long, Scott Hogan and Sean Maguire could well have taken advantage of this openness, but that would require an element of forethought from their manager; forethought that has never, at any point, been evident throughout O’Neill’s increasingly untenable tenure.

During the post-match press conference, O’Neill insisted he had “seen signs of improvement” in Ireland. Perspective, as always, is all relative.