It’s been seven years since this fixture saw the like. Such chance-laden drama called to mind the events of October 29, 2011: the beginning of the end for André Villa-Boas at Chelsea. On that fateful day, when Arsenal prevailed 5-3 at Stamford Bridge, two high defensive lines were undone by incoherent pressing. The disorder within Chelsea’s ranks was worse, however, and Robin van Persie took full advantage. Villas-Boas, with his super-slow defensive cohort, was doomed to fail. Roman Abramovich, fingers burned, dared not risk appointing a progressive coach again — until now. 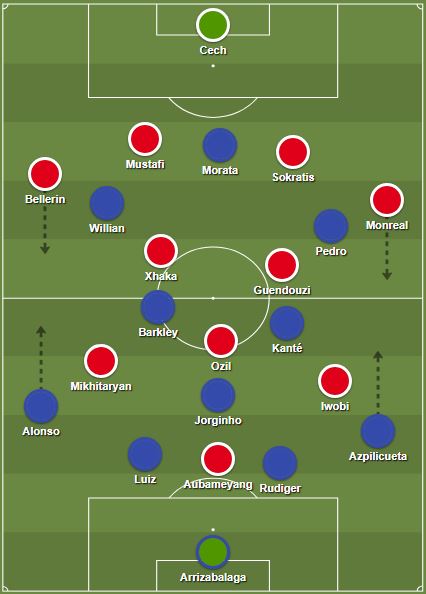 The early signs suggest that Maurizio Sarri’s efforts to remake Chelsea will succeed where the callow Portuguese failed before him. But Sarrismo, a high-octane blend of pressing, possession and verticality, is still very much a work-in-progress.

For Arsenal, under Arsene Wenger, had never created four big chances away to a fellow ‘Big Six’ side in any of the last three seasons. Yet, in only their second game under Unai Emery, the Gunners hit that target before half-time.

Such bountiful chance-creation might lead one to think that Emery has hit the ground running at the Emirates. The reality, however, is that the former PSG boss faces a far more daunting task than Sarri. Arsenal look just as ill-equipped to implement a high-press as Chelsea did seven years ago; and perhaps even less suited to weathering one.

As seen against Manchester City last weekend, Petr Cech and his defence once again wilted in the face of an opposition squeeze. Unlike Emery, Sarri has already drilled his new charges into pressing effectively as a unit high up the pitch. In the battle for possession dominance, contested between two managers who love to be the ‘protagonist’, Sarri was the clear winner. Chelsea enjoyed 59% of the first-half possession; no surprise, therefore, that Arsenal dropped back and conceded defeat in that regard after half-time.

In a rerun of their International Champions Cup encounter earlier this month, the Blues bypassed Arsenal’s press with consummate ease. Using the imperious Jorginho as a tempo-dictating pivot, the likes of David Luiz and Antonio Rudiger coped far better under pressure than their Arsenal counterparts. Vertical passes, Sarri’s preferred method of bisecting opposition lines, were a regular occurrence. And with no pressure on the men playing them, Emery’s high line was at Chelsea’s mercy. All four of Chelsea’s first-half chances, including their first and second goals, developed in this manner: one vertical pass from deep, springing a blue shirt in behind the Arsenal offside-trap.

Yet somehow Arsenal were more dangerous. Starting in the 19th minute, the Gunners wasted three big chances and scored one. And, for good measure, they created two further pretty good ones, too; one of which Henrikh Mkhitaryan snaffled, atoning for his earlier sitter. All six chances, if you can believe it, could be traced to the exact same Chelsea frailty: inadequate defensive transitions in wide areas.

Six times Arsenal overloaded Chelsea’s full-backs, Cesar Azpilicueta and Marcos Alonso. And six times either Pedro or Willian were caught out of position, ahead of their respective assignments, Nacho Monreal and Hector Bellerin. Arsenal prevailed upon this chronic confusion on two occasions; once from either flank. But, in truth, Chelsea were extremely fortunate to go in level at half-time. Luiz and Rudiger, for all their composure on the ball, didn’t exactly defend the resultant cut-backs bravely either. Put it this way: if James Tarkowski and Ben Mee played for Sarri, they would both be nursing some big bruises right about now.

In the end, however, Sarri need not have worried. After an ephemeral early second-half burst, in which the Gunners looked like getting their pressing act together, Emery’s side dropped off significantly. Chelsea, allowed to dictate the game at will, duly turned their attentions to the left-flank, where substitutes Eden Hazard and Mateo Kovacic began to conduct an overload mission. Alonso, who bombed past Mkhitaryan to craft the opener, advanced with even greater regularity, and even Pedro drifted over to join the party on occasion.

Despite the dogged efforts of half-time substitute Lucas Torreira, Arsenal’s right-hand side found itself completely overwhelmed. Penned in, with no real counterattacking threat to bring to bear, it took the visitors until the 76th minute to even attempt a second-half shot on Kepa’s goal. Chelsea had already bashed nine in Petr Cech’s direction by that point. And, although the introductions of Alexandre Lacazette and Aaron Ramsey briefly hinted at an Arsenal revival, Alonso’s subsequent winner came as no surprise. Nor, for that matter, did Mkhitaryan’s failure to follow the Spanish full-back. Lacazette, who lost possession in the lead-up, filled in for the Armenian, but proved no match for Hazard’s silky skills. Torreira, who let Alonso go on the edge of the box, will not reflect favorably on his second appearance in an Arsenal shirt.

Arsenal’s attacking abandon resurfaced after that goal, as did their vulnerability to simple vertical passes. The impressive Kovacic played Alonso in behind the Arsenal defence with one such pass, but Olivier Giroud fluffed the finish; one of three late chances the Frenchman wasted. Alvaro Morata, who pressed aggressively and took his goal well, will not feel threatened.

Nor perhaps will Matteo Guendouzi, the 19-year-old French midfielder who showed more grace under fire than any of his more experienced teammates. Guendouzi was the only player to complete 100% of his passes in the first-half, despite the vigor with which Chelsea pressed his side. Xhaka, too, used the ball cleverly under pressure, suggesting that Arsenal fans should give Emery’s process time to take effect.

Their equaliser, after all, started at the feet of the much-maligned Cech, who instigated an 18-pass move through Chelsea’s lines that culminated with Alex Iwobi succeeding where Pierre-Emerick Aubameyang had twice failed. Schooled under the Wenger learning tree, these players know how to play football; it’s the off the ball stuff that will give Emery real headaches. Mesut Ozil, for example, is just not fit to be the number-10 of a side with ambitions to press high. Ramsey, who admittedly flopped in the 10 against City, offered far more energy in both directions. A move to 4-3-3, accommodating both Ramsey and either Xhaka or Guendouzi as eights, is surely not far away.

And there’s a real sense that this Chelsea side, under Sarri, are not far away from something special either. They played some magnificent football here at times, alternating between intricate and direct as appropriate. But the shoddy defensive transitions that allowed Arsenal to alight upon Chelsea’s full-backs will not stand at Stamford Bridge. Sort them out, however, and the sky’s the limit for the chain-smoking Sarri. Fail, and his fate will match that of the rally-driving Villas-Boas. Still, with two wins out of two, the eccentric Italian has earned a celebratory cigar. Or eighty.