By his own admission, Maurizio Sarri’s methods can take time to bed in. The exacting coach took just seven points from his first 10 games in charge of Empoli. And his prior posting at Sorrento, where he expected his players to memorise just the 38 set-piece drills, lasted all of six months. But the Neapolitan hit the ground running at his hometown club, and Chelsea fans will be hopeful that this abject Community Shield showing is not a harbinger of early-season pain to come. 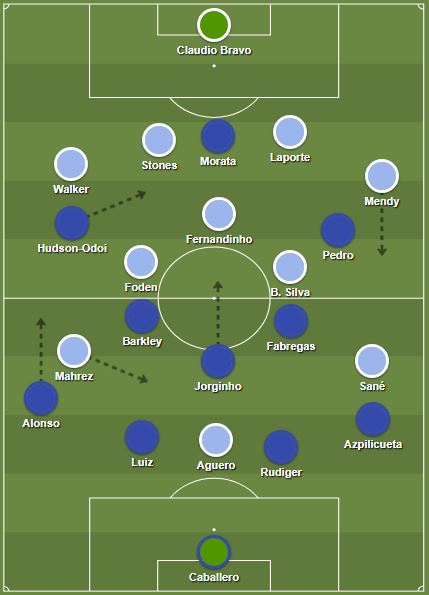 Whatever the immediate future holds, Sarri has a huge job of work on his hands. An Arrigo Sacchi apostle, the 59-year-old worships at the altar of compactness. Making a pressing game work, Sacchi said, is contingent on limiting the gap between one’s defence and attack to 25m at any given time. Much to Manchester City’s glee, that was a standard Chelsea comprehensively failed to reach on Sunday.

Sarri is also a big fan of verticality, of straight long passes that break the opposition lines. But only one side were pulling them off throughout this traditional curtain raiser, and it wasn’t his. While Chelsea had to wait 25 minutes to even attempt a shot on Claudio Bravo’s goal, City played through Chelsea’s loose eleven for fun. And Jorginho, renowned for his positional intelligence, didn’t help by continually pressing higher than his central midfield colleagues.

The Brazilian-cum-Italian might have got away with it had N’Golo Kanté been stationed to his immediate right. But, with the Frenchman still on holiday, neither Ross Barkley nor Cesc Fabregas evinced enough tactical intelligence to compensate. In a compressed game, with both sides asked to pass through a high-press, there was only going to be one winner.

City’s elegant centre-back pairing, a glimpse into the club’s long-term defensive future, laughed in the face of Chelsea pressure. While City’s press forced both David Luiz and Antonio Rudiger to pass sideways, Pep Guardiola’s composed twosome progressed the ball forward whenever possible. Aymeric Laporte proved particularly impressive in that regard, picking the vertical pass that led to Sergio Aguero’s opener. Bernardo Silva, a revelation here in one of the free-eight berths, collected the Frenchman’s pass in behind Jorginho. And, unforgivably from a Chelsea perspective, the next recipient Phil Foden found himself free between the lines, too.

In fact, both Silva and Foden regularly received possession in the half-spaces behind Fabregas and Barkley respectively. Jorginho, therefore, was overrun and forced to attempt far more tackles than usual — Allan’s job at Napoli, and Kanté’s job going forward. Only 50% of the 26-year-old’s eight first-half lunges came off and he was dribbled thrice by Silva.

The Portuguese winger is tailor-made for a central role in a pressing duel like this. When the opposition is compressing the space, a midfielder who can dribble out of tight ones is a godsend. As the season progresses, his namesake David may well be taking the odd glimpse over his shoulder.

A tendency Jorginho needs to develop quickly if he is to survive the Premier League whirlwind. With City closing down passing lanes to foil him, the midfielder was twice caught in possession inside his own half; once either side of half-time. Only an underhit pass from Aguero, still a work-in-progress in general play, robbed Leroy Sané of a first-half goal.

Guardiola may worry, however, about the frequency with which Fernandinho was isolated in front of his own defence. Neither Foden nor Silva protected their zones particularly well either, and Callum Hudson-Odoi twice prevailed upon Foden’s absence to cut inside and test Bravo from range. Happily for City, Kyle Walker’s canny positioning limited the promising 17-year-old’s impact. Walker aped his role for England, assuming centre-back positions to thwart Hudson-Odoi and his team-mates. Guardiola, a long-time Sarri watcher, is well aware of the ex-banker’s fondness for favouring the left flank; Walker’s deployment was surely devised with that in mind. His right-back restrained, the Catalan allowed only returning left-back Benjamin Mendy to advance.

Still, City focused the lion’s share of their attacks on Riyad Mahrez’s right flank, where the champions were continually thwarted by Marcos Alonso. Mahrez had it tough up against the Spaniard; so much so that the Algerian started the second-half on the opposite flank instead. Alonso, who has always fared better in a back five rather than a four, will take great heart from seeing the £60-million man off.

The left-back also constituted one quarter of a wildly malfunctioning high line, however. As Chelsea’s ineffectual press developed into a nonexistent one the longer the second-half wore on, Sarri’s offside trap began to look particularly ill-advised. Aguero broke it twice between minutes 49 and 52, but City failed to capitalise on either gilt-edged opportunity.

But, with the usual substitution glut looming and threatening to kill an entertaining game, Aguero finally struck and did the job himself. John Stones, who stepped out to thwart Alvaro Morata throughout, was the instigator, demonstrating once again how well-equipped City’s defence are in the technical department.

With Alonso caught upfield, a five-on four counterattack resulted from which Silva bagged a richly deserved assist. Aguero sealed his double, and Sarri must look upon the Argentinian with green eyes. Work on bringing a suitable number-nine to Stamford Bridge will continue; but the Neapolitan knows his teething problems are much, much broader than that. In truth, City’s two-goal winning margin flattered Chelsea here.