Neither England nor Croatia have reached the last-four of a World Cup in a generation. Both fell at the penultimate hurdle last time out, in 1990 and 1998 respectively. But now, with all the favourites fallen by the wayside, a golden opportunity to progress further has materialised that only one nation can grab. And, with Gareth Southgate firmly wedded to his preferred system, it’s difficult to avoid the following conclusion: victory and defeat depend almost exclusively on the tactical whims of one Zlatko Dalic. 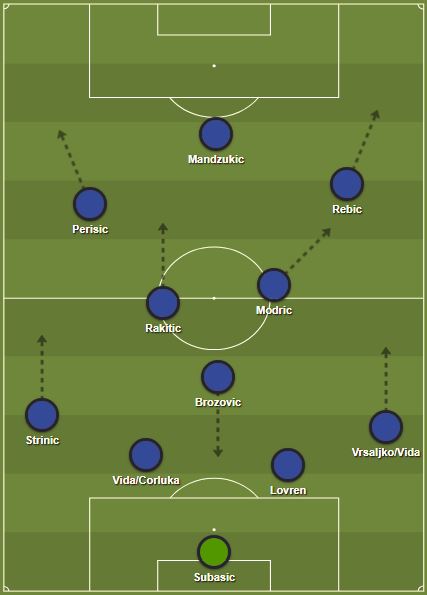 The Croatian 4-3-3: as seen against Argentina, Iceland and Denmark. Sime Vrsaljko is a major injury doubt, with Vedran Corluka likely to deputise

Parachuted in last October to douse Ante Cacic’s flaming wreckage of a qualification campaign, Dalic successfully navigated the decider in Ukraine with a 4-2-3-1. In a cagey winner-takes-all game, with Luka Modric fielded in an uncustomary number-10 role, the victorious Croats didn’t exactly pull up any trees. But they did enough to book a playoff with Greece; won with ease, using the same system.

Cacic, on the other hand, usually employed Modric in a more natural central midfield capacity, dictating the game from deep. Rather than operate in tight spaces between the lines, the 32-year-old instead prefers to see the pitch in front of him. Quarterbacking diagonal passes, and dribbling from deep to the right-wing, are his fortes. But Croatia are robbed of both when Modric is fielded just off a striker.

Dalic, to his credit, diagnosed this problem at some point between November and June. But his prescription, a gung-ho 4-2-4, proved far from ideal. Both Modric and his similarly dangerous partner Ivan Rakitic were restricted by their defensive responsibilities against Nigeria. Croatia, with no link between midfield and attack, therefore relied on an own-goal and a penalty to edge out a poor outfit. Modric’s spot-kick, struck on 70 minutes, was his side’s first shot on target of the game.

No surprise, then, that Dalic reverted to a three-man midfield for the meeting with Argentina. But, instead of returning Modric to the 10, a compromise was hit upon. With yet another playmaker, in Marcelo Brozovic, fielded at the base of a 4-3-3, both Modric and Rakitic were given freedom to advance.

Argentina’s understaffed midfield generously gave the crafty duo space to do their through-ball thing. Wingers Ivan Perisic and Ante Rebic, scampering through on either side of Jorge Sampaoli’s poorly-protected back-three, were thrilled with the service. Right-back Sime Vrsaljko, too, had a field day. Sampaoli’s ill-advised 3-4-2-1 system, in which neither Maxi Meza nor Lionel Messi were expected to track full-backs, freed Vrsaljko to fashion two big chances for his side.

Undoubtedly, both Gareth Southgate and Steve Holland, who also famously favour a back-three, will know all of the above. As, indeed, they will know that Dalic bafflingly reverted to 4-2-4 for his quarter-final meeting with Russia. Only an hour-mark switch back to 4-3-3, pushing both Modric and Rakitic higher again, restored balance to his shell-shocked side.

England’s management team, then, surely expect that to be the tactical challenge awaiting them on Wednesday night. The ease with which England overcame Sweden’s 4-4-2 will not have gone unnoticed in the Croatian camp. Dalic’s 4-2-4 would surely be outnumbered in central areas in a similar manner, forcing both Perisic and Rebic back into their own-half. 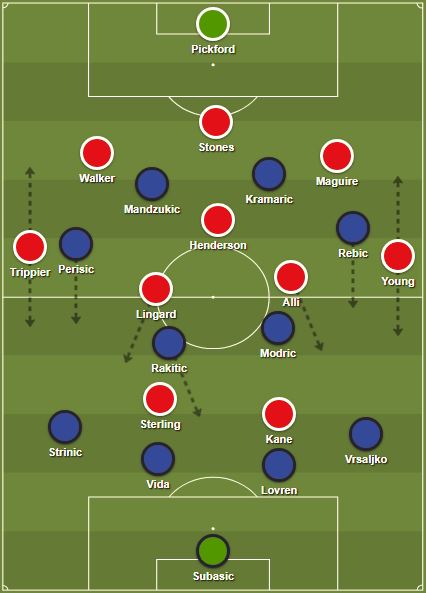 What England fans do want to see: a Croatian 4-2-4, dominated in midfield, freeing Trippier/Young to advance, and forcing Perisic/Rebic back

Both possession and territory, therefore, would be under England’s control. But, whether Southgate’s 3-3-2-2 system can handle Dalic’s 4-3-3 or not is very much up for debate.

For that system’s many frailities have already been occasionally apparent against weak opposition. Recall the big chance Sweden’s free left-back Ludwig Augustinsson created for Marcus Berg. Recall also the damage very nearly wrought by Panama right-back Michael Murillo. With no wingers in harness, Southgate’s system relies on the midfielders either side of Jordan Henderson to shuttle out to opposition full-backs.

But, with Henderson already at serious risk of overload, Dele Alli and Jesse Lingard are finding that task difficult to accomplish. Southgate’s plan-of-attack, that so heavily relies on both men to run in behind opposition defences, only exacerbates the problem. The frequency with which the underwhelming Swedes found space between the lines should act as a klaxon call for Southgate: Modric and Rakitic will not waste it.

Nor will Perisic and Rebic play infield like Juan Cuadrado did in the second round. José Pekerman’s narrow diamond let Ashley Young off the hook, robbing Colombia of a player to run the channel to Harry Maguire’s left. Maguire’s aerial ability has stood out at this tournament, but his middling fleetness of foot has yet to be tested.

Given Young’s longstanding positional deficiencies, Croatia may finally be the side to pull Maguire out on the cover. The prospect of Kyle Walker defending at the back-post, as disastrously seen against Tunisia, should not fill Southgate with any great glee either.

The threats posed by a Croatian 4-3-3, therefore, would likely pin both Young and Kieran Trippier back, turning them from wing-backs into full-backs in a back-five. Not only would this rob England of their best attacking outlet thus far in Trippier, it would also completely cede the battle for possession to Croatia. England, for the first time, would be on the back foot. And Dalic’s playmakers, in theory, could run rampant in the spaces either side of  — and in-between — England’s central midfield three. 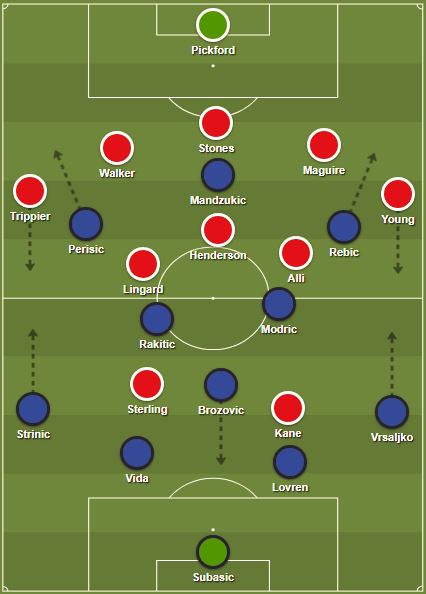 What England fans don’t want to see: a Croatian 4-3-3 matching England in midfield, with Perisic/Rebic pinning back Trippier/Young; and, potentially, running in behind them, too.

Meanwhile, with no English wingers to track them, and acres of space to invade, Croatia’s free full-backs could decide the contest. Here, the injury Vrsaljko collected against Russia could be key to England’s survival chances. The Atletico Madrid defender has been one of Dalic’s most potent attackers throughout this tournament. He would be a big loss for this one, if ruled out as expected.

And, while Domagoj Vida’s overlapping won the corner from which he himself scored against Russia, the centre-back represents a poor permanent replacement. Having to field Vedran Corluka at centre-back, against such a pacey English forward line, may also come back to bite Dalic. Regardless, both Ivan Strinic, and one of Vida or Vrsaljko, are highly likely to spend most of the game in England’s half.

Southgate may, therefore, be forced to change tactics mid-game for the first time at this World Cup. And whether England’s manager sticks or twists may ultimately decide his nation’s fate. But, even if Southgate sticks, there are still a couple of silver linings that could save his bacon.

Regardless of the system Dalic plumps for, Croatia will themselves be vulnerable between the lines, too. Blessed with a plethora of deep-lying playmakers, none can really be seen as out-and-out holding midfielders. Absent a genuine number-six, with naturally destructive tendencies, Dalic’s side have long been light in front of their defence.

England, therefore, should win plenty of second balls if forced to go direct to Harry Kane. That is, after all, how Denis Cheryshev scored Russia’s quarter-final opener, when both Modric and Rakitic were positioned too deep to compete for Artem Dzyuba’s knock-down.

And, if England can flex their counterattacking muscles, space either side of Brozovic is guaranteed to materialise. This, of course, is the flipside of operating with two offensively-minded central midfielders like Alli and Lingard: both will flood the box at every opportunity, and both need to be tracked. Here, Croatia’s consecutive shootout odysseys, and related fatigue, may also prove decisive.

Finally, Croatia’s defence of set-pieces may be the Balkan side’s most obvious Achilles’ heel. Mario Fernandes’ free header for Russia, and Zanka’s long-throw goal for Denmark, both stand as prime examples. Goalkeeper Daniel Subasic, partly at fault for both Zanka’s goal and Cheryshev’s, also looks uncertain.

The Monaco stopper’s form has been indifferent for some time now, and his presence under high balls remains anything but assured. England, who have eked eight of their 11 goals from dead-balls, surely smell blood.

All is not lost, then, for Southgate, by any means; particularly if Dalic unwisely deviates again from his optimal 4-3-3 formation. The 51-year-old would do well to learn the lessons of history, in that regard. Remember: the last time Croatia reached this stage they were configured in roughly the same 3-3-2-2 shape England now wield. France’s free attacking full-backs did the damage on that occasion; Lilian Thuram scoring both goals in a 2-1 victory.

Miroslav Blazevic’s bronze medal winning side, therefore, ultimately paid for their vulnerability in wide areas. Will Southgate be telling a similar sob story in 20 years time? All will be revealed on Wednesday. Dalic, it’s all down to you.