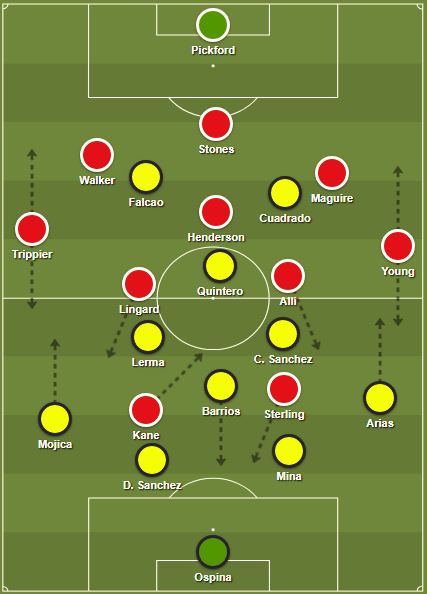 Pekerman’s usual fulcrum, James Rodriguez, missed out again here due to a calf injury. Having had a direct hand in 48% of his country’s paltry 21-goal qualification tally, Rodriguez is well accustomed to singlehandedly pulling this otherwise functional side up by its bootstraps. Not this time, however; his manager would have to look elsewhere for inspiration.

Pudgy playmaker Juan Quintero, therefore, was again asked to sip from the Real Madrid man’s poisoned chalice. After a super showing in the opener against Japan, one goal and two assists in three games copperfastened Quintero’s starting berth; obvious conditioning issues notwithstanding.

The one game in which both featured throughout showed us a different Colombia. After a difficult first-half, both Rodriguez and Quintero cut Poland’s 3-4-2-1 system apart with through-balls; Pekerman’s side ultimately running out 3-0 winners. But, with Rodriguez ruled out here again, Quintero would have to do it alone.

And the River Plate loanee would have to do it from the number-10 position of a surprising 4-3-1-2. Widely expected to stick with the 4-3-2-1 he used in tougher qualifiers, and throughout Monday’s training session, Pekerman instead fielded his diminutive ingenue behind two strikers: Radamel Falcao and winger-by-trade Juan Cuadrado.

There was method to Pekerman’s apparent madness, however, as the Argentinian sprang a second surprise, too. Rather than sit deep and invite England on, as also expected, the former midfielder instead ordered his players to press Gareth Southgate’s side high. All of John Stones’ passing angles, therefore, were closed off: Falcao and Cuadrado prevented service to the other two centre-backs, while Quintero sat on Jordan Henderson.

Henderson, who Tunisia allowed to dictate England’s opener from deep, was duly nullified as a playmaking force. The midfielder failed to make the list of top-five passers at half-time, completing a pathetic 65% of those he did attempt. And that underwhelming hit-rate could not be simply chalked up to Quintero’s close proximity.

Right in front of Henderson, Colombia’s midfield shuttlers assiduously man-marked Dele Alli and Jesse Lingard. And Wilmar Barrios dutifully picked up whichever England striker dropped between the lines, too. So, even when Colombia’s press was bypassed, England invariably lost possession in the middle-third anyway.

Unsurprisingly, then, Southgate’s side found playing through the thirds, as it were, difficult to say the least. England, instead, were forced to look to the touchlines; specifically to Kieran Trippier, the only Englishman that comprehensively got the better of his minder.

Finishing the contest with a game-high eight tackles, and forcing Johan Mojica into failing with all five of his dribbles, Trippier also created England’s only two chances of the first-half. The Spurs defender attempted all of England’s three open-play crosses; one of which Harry Kane headed over, the other blazed wide by Jesse Lingard.

So stumped were Southgate’s men that a frustrated Stones was witnessed, in the 42nd minute, ushering his teammates to drop and receive. Kane often found himself doing just that, in fact, occasionally popping up in his own half to take a precious touch of the football; music to Colombian ears.

A perfect 45 minutes for Pekerman, then, one might be tempted to think. And it would have been, too, if there were two phases to the game of football rather than four. Defensively super-sound, Colombia were unfortunately completely toothless in the final-third; and not for the want of trying either.

Although both full-backs advanced regularly, the South Americans managed just one first-half touch in the England penalty area; attempting precisely zero shots from within those bounds. And Quintero’s employment, as a Henderson spoiler, was the primary driver of this inertia.

Yes, Henderson’s game was disrupted utterly by Pekerman’s ploy. But the wily old coach also nullified his only real creative outlet in the process. Like Henderson, Quintero finished the half outside the list of top-five passers, completing only 68% of those he attempted.

Perhaps realising his error, Pekerman enacted the first of many tactical switches at the beginning of the second-half. Quintero swapped places with Cuadrado, in an effort to get the 25-year-old exploiting the half-space behind Alli. That plan was summarily blown up in the 54th minute, however, when England’s seventh set-piece goal of the tournament put them ahead. Trippier once again was the dead-ball provider, and Carlos Sanchez, once again, lost his head.

Although, to be fair to the ex-Aston Villa man, all those around him were not exactly keeping theirs. Colombian tempers boiled over, preventing their immediate refocus on the hunt for an equaliser. In the midst of all this bad blood, Pekerman enacted a second tactical change, dropping Quintero deeper into a three-man midfield. Striker Carlos Bacca replaced shuttler Jefferson Lerma, allowing Colombia to match England’s 3-3-2-2 like-for-like.

Alas, the departed Lerma had been Lingard’s minder. And, if anything, therefore, Pekerman’s latest bout of tinkering only succeeded in making England more dangerous. Lingard twice ran in behind from minutes 73 to 77, only for the speedy Davinson Sanchez to repeat his Senegal heroics with two more crucial last-ditch interventions.

Indeed, Colombia’s only real chance — before Yerry Mina’s injury-time leveler — stemmed from an English error. Kyle Walker, still a fish out of water at centre-back, dropped another clanger by gifting Bacca possession in the England half. Fortunately for Southgate, who displaced Walker to accommodate Trippier’s talents, Cuadrado fluffed his lines when clean through.

Unsurprisingly, the momentum eked from Mina’s dramatic late intervention propelled Colombia throughout extra-time. As did Pekerman’s latest bout of tactical tinkering. Substitute Luis Muriel resumed the wide-left role in which he deputised for Rodriguez against Senegal. Colombia’s shape then roughly resembled a 3-4-2-1; sometimes a 4-4-2, when Bacca moved inside from the right to help Falcao press.

Santiago Arias, who started at right-back, began to tuck inside, leaving the entire right-flank to Cuadrado; as seen in both the Poland and Senegal encounters. Mojica, meanwhile, finally had company with which to overload Trippier. Colombia duly created several extra-time chances from that side, including the Mojica cross that Falcao headed inches wide. England, penned back, attempted no shots in the first-half of extra-time; and only four final-third passes.

Right at the death, however, Southgate’s side did fashion another dead-ball chance; their seventh of the game. The erratic Eric Dier directed his free header wide, after also mislaying five of his seven normal-time passes. But the Tottenham man will take heart from scoring the decisive shoot-out penalty.

As, indeed, will an entire nation. England are through to the last eight, having banished two hoodoos. Neither a knockout phase game, nor a penalty shootout, should bother them unduly again. Colombia, meanwhile, can have no complaints. Pekerman wanted an ugly game, and he got it. His side’s eventual elimination does not, therefore, inspire an iota of sympathy.

One thought on “ANALYSIS: Pekerman spoiling tactics pay off until the penalties”