Argentina, beware. Having abandoned the 4-2-3-1 that Croatia conquered on Saturday, Gernot Rohr’s new-look Nigeria are now primed to counterattack. Channel-space the Albiceleste generously gifted to the Croats simply will not wash against this Super Eagles selection. Ahmed Musa, who hit the Argentinians on the double four years ago, must be licking his lips. 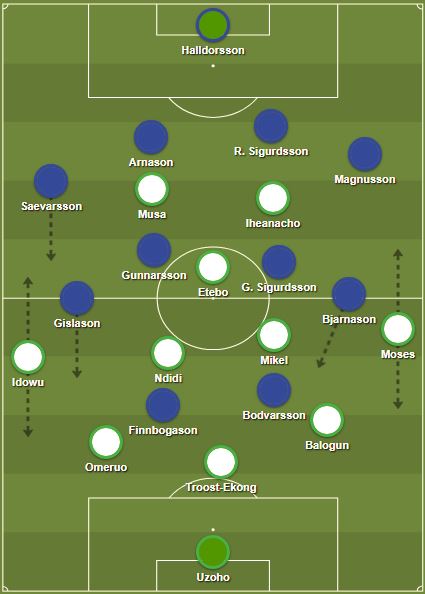 Before the tournament, Nigeria were heavily fancied to advance from Group D. But that miserable reverse to Croatia, throughout which the Super Eagles looked stodgy and slow, rather tempered pundit enthusiasm.

John Obi Mikel may have played at number-10 throughout qualification, against the likes of Cameroon and Zambia. But the natural number-six, now 31, offered nothing between the lines against the relative might of Ivan Rakitic and Luka Modric.

Odion Ighalo, therefore, cut an isolated figure up top, while neither Wilfried Ndidi nor Oghenekaro Etebo could be reasonably described as a deep-lying playmaker.

For this clutch meeting with Iceland, Rohr dropped Mikel deeper, alongside Ndidi, in a new-look 3-4-1-2. This, in theory, spelled trouble for thunderclapper-in-chief Heimir Hallgrimsson, who reverted to his country’s customary 4-4-2 shape as predicted.

On paper, with an spare man at the back, a spare man in central-midfield, and a two-on-two against Iceland’s aging centre-backs, Rohr had it made in the shade. But, as always, the tiny island nation had other ideas, killing all of those theoretical advantages by displaying incredible collective compactness — from back-to-front and side-to-side.

With both strikers, Jon Dadi Bodvarsson and Alfred Finnbogason, dropping goalside to deny him passing angles, Mikel found it difficult to dictate from deep. Here is where Etebo’s odd deployment, at the tip of the midfield triangle, hurt rather than helped Rohr.

The new Stoke City man’s main strength is his ball-carrying ability; as seen in the defeat to Croatia. Fielded closer to goal today, however, Etebo could offer none of that. Finding space between the lines isn’t the 22-year-old’s game; not that there was much of it to find anyway.

Stymied further back, the Super Eagles’ front-two of Musa and Kelechi Iheanacho therefore rarely got played into advantageous positions. And, elsewhere, transitions out to wing-backs Bryan Idowu and Victor Moses were too slow, enabling Iceland’s midfield-four to do what it does best: shuttle across the pitch and snuff out attacks.

Iceland were allowing Nigeria the ball; but with so much pace in the Super Eagles side, and little guile, they really looked set up to counterattack themselves. In games like that, where both sides want to sit and break, there’s always one automatic loser before a ball is kicked: the viewer.

At least Nigeria toiled along with us. Incredibly, the African side attempted precisely zero shots — never mind shots on target — before the break, as Iceland carried all of the game’s paltry attacking promise.

In fact, such was the intensity of Iceland’s right-wing focus that all four of their open-play crosses were attempted from that side. Saevarsson delivered two particularly dangerous ones, one of which had the unconvincing goalkeeper Francis Uzoho flapping.

Famed for their thunderclap transitions, it was no surprise to see four Icelandic bodies fill the Nigerian box when those Saevarsson crosses rained in. The third-man running of Gyfli Sigurdsson, combined with the front-two and left-winger Birkir Bjarnason, had Nigerian nerves jangling.

Set-pieces, too, often proved hot to handle for Rohr’s side. The chaos engendered by the sheer weight of Icelandic bodies, each of whom had to be man-marked, should have seen Finnbogason net a Sigurdsson free-kick just before the break.

And, as always, Iceland loaded the box in advance of their characteristic long-throws, too; a weapon whose potency will live long in English memory. Unfortunately, right at the beginning of the second-half, it proved a double-edged sword.

Nigeria cleared their box, Musa won a tussle with Saevarsson, and he and Moses turned a three-on-three break into another World Cup goal for the Leicester City striker. Iceland had been undone by a fast-break, their most potent weapon of all.

This, of course, was music to Rohr’s ears, as the German coach could now instruct his side to play their natural counterattacking game. Hallgrimsson, on the other hand, was forced to encourage his full-backs up the pitch. And although Saevarsson’s greater sense of adventure inspired the penalty award Sigurdsson spurned, it also exposed the left-channel manned by 35-year-old Kari Arnason.

Put out to pasture by Aberdeen last month, the veteran central defender understandably failed to out-race Musa to a simple long-ball. Having attempted zero first-half shots when asked to control the game, Nigeria finished it with 16; including Musa’s decisive second goal.

This is a team that wants to counterattack, and is primed to do so. And if Sampaoli gives them the opportunity, it could be curtains for the Albiceleste on Tuesday.