Alan Reynolds must have thought Limerick would go down easy. Instead, the Super Blues served “Rennie” a result that will take him some time to digest. 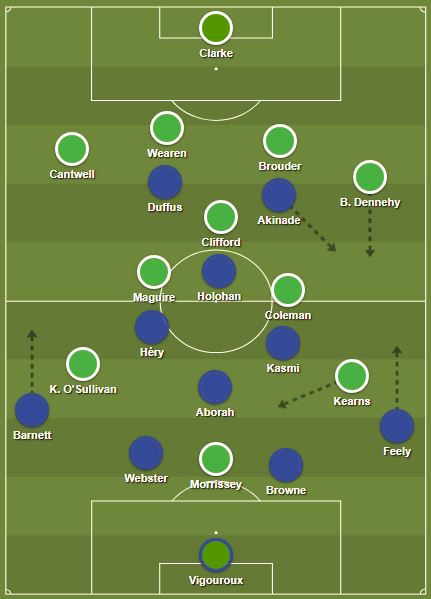 Resting veteran midfielder Paul Keegan, with one eye on Monday’s trip to Dundalk, suggested Reynolds was taking this one relatively lightly. But no-one, least of all the Waterford boss, expected Limerick to press his hot-headed replacement so heavily.

Stanley Aborah, normally deployed higher up the pitch, assumed Keegan’s duties at the base of Reynolds’ diamond. Barry Maguire and Cian Coleman rushed forward in turn, to press — and sometimes foul — the Ghanaian.

In this regard, Tommy Barrett’s side picked up where they left off. A narrow defeat to St Pat’s, seven days prior, saw Limerick refuse to let the Saints build from the back. So too here, where neither Aborah, nor full-backs Rory Feely and Dylan Barnett, were afforded any time on the football. A stream of fruitless long balls, kicked from the boots of centre-backs Kenny Browne and David Webster, resulted.

Such a high-risk strategy raised the spectre of affording Bastien Héry pockets of space between Limerick’s lines. But Barrett’s suitably high defensive line reduced that space to a minimum, carrying the added benefit of pushing Ismahil Akinade’s aerial prowess away from goal. And, on the rare occasions Waterford did find the likes of Héry in space, Limerick’s defence narrowed impressively to close the channels — and intercept the through-ball.

The Shannonsiders’ back-line, unchanged for the first time since March’s reverse fixture, looked far more comfortable defending higher up the pitch. Too often second to balls into the opposition striker’s feet, the likes of Killian Brouder and Eoin Wearen were suddenly first to everything.

Crowding imposed on Courtney Duffus, with the heel-snapping Coleman also on the scene, led to the break and Conor Clifford corner from which Danny Morrissey’s near-post header opened the scoring.

And it didn’t take long for Limerick’s relentless pressing to pay two further dividends. First, David Webster reprised his role as the villain in Bray by cheaply coughing up possession for Morrissey’s second. Despite his injury woes, and obvious conditioning issues, the 24-year-old looks the only Limerick attacker capable of keeping his nerve in one-on-one situtations. So it proved here.

Then Aborah, pressed into submission, reprised his Turner’s Cross tunnel antics by letting his frustrations again get the better of him. Daniel Kearns, just back from a two-month injury layoff, bore the brunt of it. Referee Graham Kelly justly rewarded a two-footed lunge with Aborah’s second red card of the season.

Reynolds and his complacency could still not be parted, however. In the immediate aftermath of Aborah’s dismissal, the 43-year-old appeared to enact no tactical reshuffle whatsoever. Both strikers, and Holohan, stayed where they were, allowing Billy Dennehy to run half the length of the pitch, skin Feely, and tee up Karl O’Sullivan’s maiden senior goal with a back-post cross.

There was nothing conservative about Feely’s positioning, however. The former Pat’s defender, wasted at centre-back in Inchicore, had already bagged three assists from right-back in 2018. And here, in the aftermath of Limerick’s third goal, the 21-year-old played almost like an out-and-out right winger.

Both he and Akinade become prominent late in the first-half, as Limerick rested on their laurels and dropped a little deeper. Previously pointless long-balls began to bear fruit. Akinade should have scored after a Webster punt isolated Billy Dennehy against Feely in the air. Instead, the ex-Bohs man rattled the crossbar. But at least he creamed poor Brouder in the process, forcing Barrett into the first of two injury-enforced substitutions.

Brouder’s removal came too late, however, to stop Akinade collecting a deep free-kick in the box and picking out Feely’s brilliant underlapping run. The Blues had a lifeline. But they could have tossed it right away on 40, after Faysel Kasmi failed to weather more Maguire pressure in the Waterford half. Laurence Vigouroux denied Coleman, and Kasmi was hooked at half-time.

The Belgian’s abrupt departure heralded the belated arrival of Keegan, who almost immediately teed up Duffus’ eight goal of the season with a delectable lofted through-ball.

Limerick, to their collective credit, quickly addressed Keegan’s freedom at the base of Waterford’s midfield. Maguire pushed onto the 33-year-old for the remainder, and struck up a surprisingly dangerous partnership with half-time substitute Mark O’Sullivan that killed the game in Limerick’s favour.

O’Sullivan, who replaced a hamstrung Morrissey, scored 12 goals for the Blues in 2017, playing no small part in their runaway First Division success. But the 35-year-old, a first-ball magnet but never a natural finisher, had yet to break his duck for Limerick in 2018.

Until he met Maguire, that is. With a Waterford equaliser looking likely, O’Sullivan beat Webster in the air to a long ball, and flicked it on to his Dutch teammate. Maguire, running in behind, was foiled by a covering Barnett, who took a kick in the foot for his troubles. Referee Kelly was unmoved, allowing O’Sullivan to pocket the loose ball.

It wasn’t over yet, though, as Waterford scored a route-one goal of their own with 10 minutes remaining. Prior to this game, all three of Akinade’s 2018 assists had been laid on a plate for strike partner Duffus. And the 24-year-old made it four here, leaping above Wearen to send the Oldham loanee through with a flicked header.

Akinade’s aerial dominance over his former Bohs teammate was marked; indeed were it not for Brendan Clarke’s impressive sweeping, Duffus could have scored another couple from this avenue, running diagonally off Cantwell towards goal.

Looking likely again to equalise, Waterford were once more undone by their manager’s exuberance. Attacker Dean O’Halloran replaced Feely on 83, ushering in what looked like a 3-2-4; with Holohan wide-left and the substitute wide-right.

Limerick’s defence was overloaded and, indeed, the substitute should have finished Holohan’s back-post cross at the death. But, by that point, the game was over, as the hosts’ woefully understaffed midfield had shipped a decisive fifth goal.

With Keegan and Héry left to fend manfully against three Limerick midfielders, Browne’s poor clearing header, on 85, was always going to drop to a Shannonsider. As it turned out it dropped to O’Sullivan, free as a bird between the lines, who returned Maguire’s earlier favour with a well-timed through-ball.

And there was still time for Webster to cap a week-long personal nightmare, and further underline how vulnerable this Waterford side are to pressure. The presence of substitute Will Fitzgerald at the byline forced the ex-Shamrock Rovers defender into an inexplicable handball. Billy Dennehy pocketed Limerick’s sixth from the resultant 12-yarder.

This result, understandably, sent shockwaves through the league, but regular Limerick watchers will know it was coming. Limerick were much improved in defeat to Cork, and their high-press against Pat’s was extremely effective. Individual errors, again, let them down on both occasions. But, on Friday night, it was Waterford who were forced into making them.

Reynolds’ players let him down here, then. But there can be no doubt that the opposite, too, is true. With one eye on Monday’s Dundalk fixture, and dreams of a title challenge burning in his heart, “Rennie” took Limerick for granted here. A harsh lesson in the value of eating an elephant one bite at a time.