Deep in his heart of hearts, Pat O’Sullivan knows it’s time to shuffle off the public stage. But self-made men like Limerick FC’s benevolent benefactor are not inclined to go gentle into that good night. 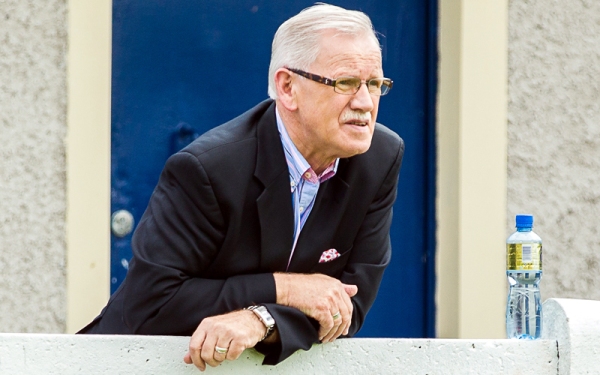 Thrice on Tuesday night, at a public meeting designed to market the club as a going concern, operations manager Kieran Judge assured attendees that a full O’Sullivan divestment was on the table. But his defiant chairman thrice declined to repeat that sentiment, stressing instead a keenness to retain a significant minority stake — to “help out” his successor.

The impulse to stay in the game is no huge surprise. Six million euro is, after all, an awful lot of money. That is the ball-park figure O’Sullivan has sunk into Limerick since staving off oblivion in July 2009. Realistically, that “investment” is gone, never to be recouped. But O’Sullivan, understandably, needs to feel it wasn’t for naught.

Ironically, O’Sullivan’s drive to leave a legacy — rather than fritter one away —  is where this story started. Historically a self-confessed GAA fanatic, the Galtee Fuels owner saw in Limerick FC a golden opportunity to fashion the city’s young people in his own image — blossoming from simple origins into prosperity.

A lavish, easy-going retirement was foregone. Instead, O’Sullivan chose the path less traveled: the bumpy, winding, uninviting, dead-end of footballing philanthropy. That choice, however naive, should be commended to the ends of the earth.

The lives of many have been greatly enhanced by O’Sullivan’s choice; nay, sacrifice. By helping to broker the wildly successful Markets Field regeneration, Limerick senior football — with a legion of lapsed fans in tow — returned to its spiritual home.

O’Sullivan’s construction of an underage structure, paving a pathway to professional football for young players in the region, has led the likes of Paudie O’Connor and Barry Cotter to big breaks that may otherwise have never materialised. Various community outreach programs, undertaken under the independently-funded Reclaim banner, have also lent a helping hand to scores of the city’s most disadvantaged youths.

But, first-team success, the first domino that must fall to fashion any sustainable League of Ireland club, has proven elusive. Surrounded by good men, like Judge and John Kennedy, O’Sullivan failed to add footballing expertise to his boardroom before 2012’s return to top-tier football.

A competitive budget was, therefore, entrusted into Stuart Taylor’s hapless hands, and frittered away on has-beens and never-gonna-bes. That, alas, is why the road of altruism has now led O’Sullivan to the dead-end so many of his League of Ireland forebears met before him.

Starved of the sustainability that only regular infusions of European cash can bring, O’Sullivan must find the bones of €500,000 every year to keep the full-time-professional show on the road. But no man’s pockets are bottomless; January’s announcement that the floor was in sight, therefore, came as no surprise.

Nor did Tuesday’s admission that part-time football is a given in 2019 unless an investor of similar financial means swoops in. But, realistically, that eventuality looks an extremely unlikely one.

When a similar meeting took place way back in July 2009, with the club at death’s door, O’Sullivan was not only in the room — he raised his hand. It did not appear, however, that any individual of such financial heft was present at the Savoy Hotel on Tuesday night. The 30-strong crowd were almost all supporters in an emotional sense; but few, if any, boast the capital to assist in a more tangible manner.

Sadly, the logic behind the money men’s absence is incontrovertible. Yes, Limerick FC may represent an opportunity akin to the one Paul Brown and Andy Connolly availed of in Dundalk. Not yet, though.

A return to part-time status in 2019 is a given, unless another backer with Pat O'Sullivan's largesse buys in.

Lee Power identified the same profit potential in Europe-bound Waterford FC. But the Swindon Town supremo bought the south-east club for a song, after it had already hit bottom. Limerick has not yet reached that point. And until it does, O’Sullivan will struggle to find anyone to take it off his hands — partly or wholly.

All of the above said, Tuesday night’s exercise ultimately proved a futile one for its organisers. But, for its attendees, the pow-wow did shed an informative light on the inner workings of a club that continually hemorrhages money O’Sullivan can ill-afford.

The November call to offer players equivalent terms to their 2017 deals stands out in that regard. With the wolf whistling up the driveway, if not yet at the door, O’Sullivan was still insistent upon propping the whole edifice up.

Neil McDonald’s untimely departure left Tommy Barrett with little transfer window time in which to maneuver. And O’Sullivan took time out on Tuesday night to chide the absent few who irresponsibly reported the Englishman’s flight was driven by budgetary issues — a completely unfounded assertion, floated by an individual who neither spoke to the club nor McDonald himself. Then again, not one member of Limerick’s traditional football media contacted McDonald in the wake of his departure — a shocking indictment of its already questionable credibility.

Staying with wages, the septuagenarian’s decision, one year earlier, to pay Premier Division wages to a host of players implicated in Limerick’s doomed 2015 campaign also sticks in the mind. Yes, such largesse ensured a facile return to the top table at the first time of asking. But the seeds of complacency sown by that generosity came back to bite in a big way in 2017.

Martin Russell paid the price. Neil McDonald picked up the pieces, shaking up a dressing-room that badly needed it. Predictably, the Englishman got no thanks for that. A certain section of Limerick’s support will only ever sympathise with those they see themselves in; and abuse those they don’t.

Wages aside, rent charged by a laundry list of facilities makes up the lion’s share of the club’s outgoings, adding up to a staggering €150,000 per annum. Here, again, O’Sullivan is partly the victim of his own questionable decision-making.

The Bruff site, owned by O’Sullivan and his wife Helen, for which three artificial pitches are mooted, remains tied up in planning red-tape; tape that looks unlikely to come unstuck any time soon, due to the site’s listed status.

As such, costly facilities like the University of Limerick, one of the club’s major creditors, will remain necessary for the foreseeable future. O’Sullivan’s kind offer to bequeath 20% of the Bruff site to the club’s next owners may, therefore, ultimately prove meaningless.

Meanwhile, half of that aforementioned rent figure is racked up by the onerous lease negotiated with the Markets Field’s owners, the Limerick Enterprise Development Fund. Despite the LEDP’s charitable status, the terms of their fraught relationship with Limerick FC are anything but generous. Eye-watering fees of €3,000 per game for the men’s team, and roughly €2,000 for the women, are bound to raise eyebrows.

As did the chairman’s admission that Galtee Fuels is nearing its end-game, too. A meeting of creditors looms on May 16 for the company, to be voluntarily wound down as part of O’Sullivan’s impending “lifestyle change” — urged by a concerned family, conscious of the terrible toll his many burdens are taking.

Such a stark change in circumstances, for such a formidable man, was difficult to hear. Indeed, O’Sullivan’s frankness drew tears from at least one emotional attendee, who could not help but reflect on the abuse and ridicule to which the businessman has often been unfairly subject.

But O’Sullivan has no time or need for such sympathy. He is a fighter, who pulled himself up by his bootstraps by not taking things lying down — even if the inviolable laws of time are dishing out the punishment. Obliging his family’s wishes on the surface, deep down Pat desperately wants to keep skin in the game.

But this story, like all stories, is destined for tragedy. Visions of maintaining a minority stake, a hand on the tiller, are chimeric. The vultures will stay in flight, circling only when the money tap runs bone dry. If the dream of a self-sustaining, top four club is to be fulfilled, it will be done without him.

And, deep in his heart of hearts, O’Sullivan knows all of this. He knows the sun is setting on his career, never to rise again. But, for now, this kind-hearted man is still fighting, because that is all he knows. Men like Pat, after all, do not go gentle into that good night.

They rage, rage against the dying of the light.

One thought on “Opinion: Happy ending beyond the reach of benevolent Limerick FC benefactor”