John Caulfield is not a man inclined to rest on his laurels. A reinvigorated Dundalk pose a serious threat to Cork City’s recent double-winning hegemony. But anyone who doubts Caulfield’s stomach for the fight need only play back the 73rd minute of this near-perfect away performance. 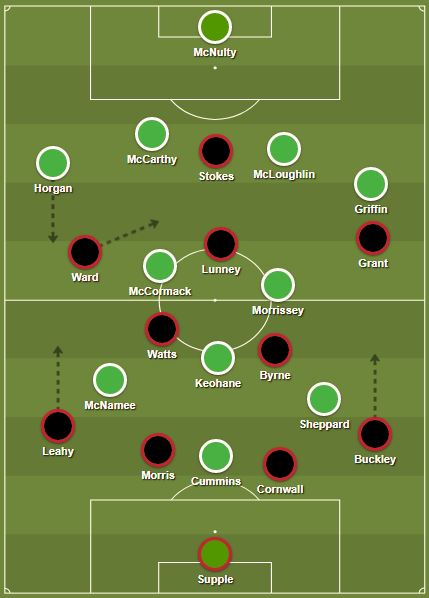 Bohs, keen again to play through their Dylan Watts-led midfield, had no answer to Cork’s press. Spooked Gypsies defenders committed countless unforced passing errors; convinced, presumably, that a green jersey was about to breath down their necks.

Keith Long has granted more freedom to his full-backs in recent weeks, to complement Bohs’ more possession-based style. Here, too, Caulfield did his homework.

Once his press retrieved the football, the Cork boss had his players kick it immediately into the spaces vacated by Keith Buckley and Darragh Leahy. The likes of Keohane and Graham Cummins had a ball in the channels, one-on-one with centre-backs Rob Cornwall and Ian Morris. Cork crossed from the byline at least three times in the opening fifteen minutes.

The aerial power Cummins possesses is well known, but the striker’s movement off the shoulder was an absolute joy to watch here. And Cornwall, whose ridiculous handball partly cost Bohs the reverse fixture, came off particularly badly.

Cummins’ attempts to run in behind the 23-year-old contributed to both Cork goals. The first, unsuccessful, was enough to prevent Cornwall from clearing Colm Horgan’s cross-cum-goal. The second, successful, saw the striker profit from Sadlier’s quickly-taken throw-in.

Buckley was again caught upfield, stranding his hapless centre-back in one-on-one combat. That it took Cork 65 minutes to turn one of many sorties-in-behind into a goal may be Caulfield’s only source of disappointment here.

Bohs, on the other hand, had no such luck. In fact, Dan Byrne’s 93rd-minute through ball to Eoghan Stokes may have been the first time Long’s side invaded the space behind Cork’s defence.

In fairness to Watts et al, the determination to play through Cork’s press was admirable, if a little misguided. Opportunities to turn the visiting defence — fixed high to keep the pressing Leesiders compact — were all too often passed up. Mark McNulty, 37, was quick off his line to snuff out the few exceptions.

And when Bohs did pass the first wave of pressure, they were quickly thwarted by Caulfield’s organisational prowess. Cork’s defensive transitions were marvelous throughout, with players recovering their positions like a flash to form a compact, impenetrable unit.

Through ball attempts were nigh-on non-existent from Bohs, who were limited to a series of speculative efforts from around the ‘D’. Only Stokes, arriving late from a deep position, attempted a significant strike from (just) inside the untroubled Cork area. And that was on 32 minutes, after 20 minutes of supposed Bohs dominance.

Wide of the mark

Forced wide by Cork’s defensive superiority, Long’s side again relied on the likes of Buckley — provider for Stokes on 32 — and Leahy to stretch the play. But several dangerous Leahy deliveries, whipped brilliantly to the back-post, were wasted by Dinny Corcoran’s absence.

Bohs, instead, needed pull-backs from the byline. But with Keith Ward running inside into congested space, followed assiduously by the impressive Horgan, that was never going to happen. Perhaps substitute Kevin Devaney, recently returned from injury, should have seen action sooner.

Meanwhile, on the opposite touchline, 18-year-old Danny Grant, a nonentity here, looked completely overwhelmed by Cork’s relentless physicality. Conor McCormack’s robust penalty area challenge on the 18-year-old, midway through the second-half, rather summed the raw teenager’s evening up. In short, he looked shook.

Forget the hand-wringing about “service to football” from footballing neophytes who miss the point. Caulfield’s prescription is a winning one; it doesn’t have to be pretty. Five wins, and five clean-sheets, in Cork’s last six games speaks volumes.

Gripes about Cork’s direct style evoke comparisons to the Republic of Ireland’s much-maligned manager, Martin O’Neill. But such a comparison would be grossly unfair. Caulfield, unlike O’Neill, is a meticulous planner, who leaves his players in no doubt as to what is expected from them. And boy did they execute his plan to a tee here.

Repeat that trick next Friday at Turner’s Cross and the Leesiders will surely redeem February’s uncharacteristically error-strewn defeat in Oriel Park.

Unfortunately for Cork, Stephen Kenny does his homework too. Despite their fraught relationship, and their vastly disparate coaching styles, Kenny and Caulfield have one thing in common: they are both exceedingly good at what they do. And they should both be celebrated for it.