If Slaven Bilic’s West Ham United had greeted the champions in this manner, claret (and blue) would surely have spilled.

Bottom of the league for both sprints and distance covered, Bilic’s shiftless side were coasting to relegation before the Croatian’s belated dismissal. But, although this was his first win at the London Stadium helm, David Moyes has already engendered a quite miraculous turnaround in his new side’s physical fortunes.

The Hammers were tireless in their relentless pursuit of Chelsea on Saturday. If Bilic had requested the same high-pressing vigor, shoddy defensive transitions would have seen his side picked off with ease.

Instead, Moyes’ boys harried Chelsea’s rearguarders with zeal, before quickly transitioning into a tight 5-4-1 when their collective press was bypassed. N’Golo Kanté, fielded at the base of Antonio Conte’s diamond midfield, endured arguably his worst Premier League outing as a result of this constant pressure. 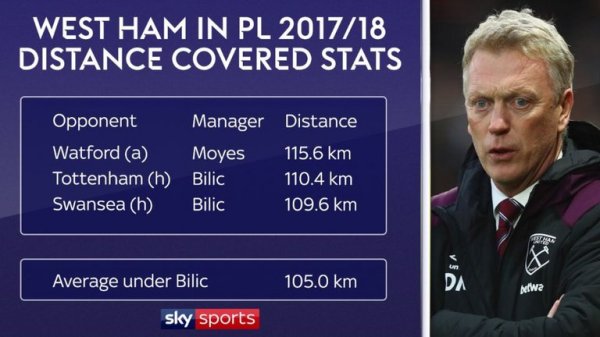 Tiemoué Bakayoko’s central-midfield presence, in place of one of the 3-4-3’s wide forwards, is designed to achieve Conte’s much-sought-after balance. But the French midfielder was removed at half-time, presumably punished for allowing Manuel Lanzini’s decisive assist to emanate from his zone.

Bakayoko’s replacement Pedro slotted in on the left of Chelsea’s diamond, as the outgoing champions huffed and puffed to zero second-half shots on target. A 63rd-minute switch to 4-2-3-1/4-2-4, that saw Manchester City over the line a week prior, came too late to secure an equaliser — or even a big chance at one.

Conte, in the post-match post-mortem, blamed fatigue for his side’s failure to follow in City’s footsteps. But, his persistence with a tactic that looks more suited to a counter-attacking outlook should carry the can.

Meanwhile, Moyes’ new charges showed no signs of that same fatigue, that so blighted his predecessor’s reign. Despite managing only a 31% piece of the possession pie, the Hammers out-ran Chelsea with the ball too, completing 23 dribbles to the Blues’ 14.

Moyes gave left-wing-back Arthur Masuaku licence to instigate counter-attacks, and the Frenchman delivered in spades; with a game-high 11 dribbles to go with the seven he executed against City. Such hard-running was unthinkable only a month ago; keep this up and Moyes won’t be a figure of fun for much longer.

Antonio Conte is not the only manager harbouring a dangerous 3-5-1-1 obsession. Tottenham Hotspur supremo Mauricio Pochettino used it to great effect this season, besting aggressively-oriented opponents like Dortmund and Liverpool.

But, against deep-lying foes, who deny channel-space for the two front players to run into, this centre-packing system ran aground. Poor performances against Manchester United, Crystal Palace, Arsenal, West Bromwich Albion, and Leicester City followed that famous Liverpool thrashing.

Indeed, during both of the latter two games, Pochettino felt compelled to move Eric Dier into midfield and switch to a more conventional 4-2-3-1 system. Heung-min Son, restored mid-game to his customary left-wing role, proved Spurs’ only real threat against the Baggies. And the Korean bagged his ten-man side’s only goal in the draw against Watford, for which 4-2-3-1 appeared from the start.

Mauricio Pochettino persisted with 4-2-3-1 against Stoke City, inspiring a five-goal rout. Hark at the average positions above; while Dele Alli (20) and Christian Eriksen (23) played in central pockets, Son (7) generally stayed wide on the left.

As it did against Stoke City, on Saturday. Son was again red-hot, eating 18-year-old wing-back Tom Edwards on toast, before nabbing a goal and an assist. This was the genuine wide threat, tailor-made to stretch a packed defence, that Spurs had been desperately searching for.

Moussa Dembélé, meanwhile, a flop at the base of a diamond against Arsenal, looked rejuvented against the Potters. The Belgian, restored to a roaming playmaker role, with Harry Winks behind him for insurance, ran the game, breaking the 100-pass barrier and out-dribbling all others.

All of the above is tempered by how abject Mark Hughes’ side were, however. Stoke have now conceded seven goals from corner-kicks, and are likely to concede bucketloads more from open-play too if the awful defensive transitioning seen here persists.

With Stoke’s midfield barrier often AWOL, Spurs attempted six through-passes and 11 shots on target; proving a constant threat on the break. Hughes’ decision to introduce a second-striker, at 4-0 down, did not help matters either. The Welshman is surely now on borrowed time.

Premier League management initially looked a challenge beyond Mauricio Pellegrino, with murmurs continually swirling about the perceived unfairness of predecessor Claude Puel’s dismissal. But the Spaniard now finally looks to be getting on top of his brief, with his Saints turning in arguably the weekend’s most impressive tactical performance.

A hybrid system, 4-4-2 in attack and 5-4-1 in defence, completely bamboozled Arsenal in the early going; particularly the lesser-spotted Per Mertesacker, in for the injured Shkodhran Mustafi.

Mertesacker’s ill-judged attempts to challenge ahead of his defensive-line created huge gaps that strike partners Charlie Austin and Dusan Tadic ruthlessly exploited. The Gunners should have been two goals down within five minutes, evoking memories of defeat to Manchester United a week prior. Instead, Austin scored his first big chance, and missed the second; both teed up by Tadic through-balls.

Arsenal are the EPL’s bottom side in the crosses-per-game standings. (Credit: WhoScored)

Tadic dutifully shuttled back into a right-wing role in the defensive phase, as Pellegrino’s side coalesced into the same compact 5-4-1 that deserved to best Manchester City in recent weeks.

Arsenal, the division’s most infrequent crossers, were forced wide, but still attempted to thread the eye of the needle regardless. Olivier Giroud’s 72nd -minute arrival, eight minutes after yet another mid-game switch to 4-2-3-1, arrived too late to win the game. But the Frenchman did head a beautiful equaliser from one of only 17 Arsenal crosses. It is a wasteful pursuit, after all, according to Giroud’s boss and fellow countryman.

In the end, Wenger griped about timewasting too. But his longstanding reluctance to make changes cost him, in truth. Pellegrino, meanwhile, was robbed here, with his ingenious tactical prescription earning only a point; instead of the three it deserved.

Pep Guardiola’s 4-6-0 did not really help Manchester City‘s cause against Jose Mourinho’s predictably deep-lying unit. Designed, presumably, to drag defenders upfield, it instead merely increased possession at the expense of penetration. City had to wait until second-half stoppage-time to create an open-play chance of note.

In that respect, Manchester United were unfortunate not to take something from a game in which they largely frustrated their derby rivals. Set-piece errors from Romelu Lukaku twice cost them parity, and the Belgian wasted the game’s most impressive passage of attacking play, mere minutes after Mourinho matched City’s back four with a 4-2-4. United may not have controlled the ball, but they were unlucky not to earn a result here.

Six changes, paired with a 67th-minute decision to remove Mo Salah at 1-0 up, were always going to come back to haunt Jurgen Klopp. The German has started to ring the changes like never before, in an effort to maintain the sustainability of his preferred hard-running style. But, in truth, both Sadio Mane and Salah missed glorious chances to put Liverpool in the clear, prior to Dejan Lovren’s brain-fart. There will be days when Klopp pays for his rotation, but this unlucky outing did not feel like one of them; sorry to break from the narrative!

Sam Allardyce’s decision to field two strikers against Klopp’s gung-ho Liverpool would have made some sense; were it not for the German’s recent tendency to employ his full-backs in a pivot-like manner, keeping one back while the other advances. Plus, as the new Everton boss himself admitted, the Toffees’ attempts at releasing their frontmen in the channels were feeble at best.

Everton finished the game with a pathetic 50% pass completion ratio, only managing to run past an opponent once. Consecutive wins over West Ham and Huddersfield may prove a false dawn, particularly if summer transfer flops like Cuco Martina are persisted with. 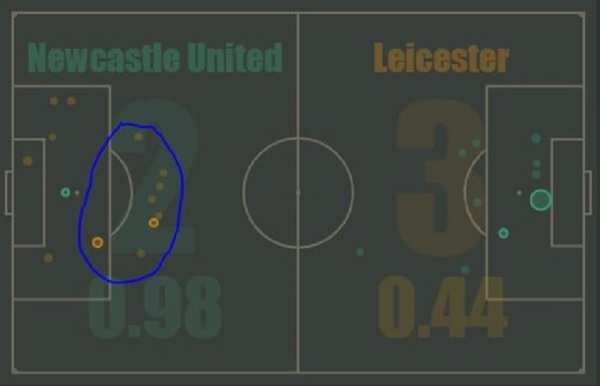 Leicester City’s expected-goals total (0.44) is underestimated, as Ayoze Perez’s late own-goal (blue dot, far left) was taken off the toe of Shinji Okazaki. That winner aside, Leicester also attempted eight shots from around the Newcastle United ‘D’ (circled in dark blue), two of which were goals.

After watching his midfield concede six through-balls against Chelsea, it was a brave move from Newcastle United manager Rafa Benitez to go with a 4-4-2 against Leicester City’s 4-2-3-1 on Saturday. Of course, there is a fine line between bravery and stupidity, as the old saying goes. Already more progressive and possession-oriented under Claude Puel, the Foxes gleefully raided the spaces in-and-around Mikel Merino and Isaac Hayden to great effect; scoring two of eight efforts from around the ‘D’.

There were negatives for Leicester City, however, even in victory, with Puel’s side again shipping from a corner-kick; their seventh such concession. Presumably, man-marking won’t find itself in the dock, however. The Foxes’ more attack-minded outlook bears some nasty side-effects too, with Wes Morgan looking particularly ill-suited to playing higher up the pitch.

Newcastle strikers Dwight Gayle and Joselu should have made more of their two-on-two opportunities, particularly with the likes of Riyad Mahrez failing to transition — and press — in a timely manner; as seen for Gayle’s opener.

Huddersfield Town again showed remarkable tactical flexibility in their 2-0 win over Brighton, with David Wagner’s side employing a far, far more aggressive approach than that seen from the Terriers in recent weeks. Wagner’s favoured high defensive-line, and high-pressing 4-2-3-1, returned, with Aaron Mooy given great licence to roam from his central-midfield moorings. What a stark contrast to recent all-out-defensive outings against Arsenal and Manchester City.

Brighton, meanwhile, have now conceded eight goals from indirect set-pieces, as Chris Hughton continually fails to get his players to pick up properly at dead-balls. Lewis Dunk was the culprit for Steve Mounié’s first, before Hughton’s side allowed a two-on-one to develop at the back-post for the Benin international’s second.

Bournemouth too were bossed in the air by their wasteful opponents Crystal Palace, who continue to massively underperform XG (expected goals) expectations. Christian Benteke’s selfish decision to take and miss a potential late penalty winner is firmly in keeping with the Belgian’s rank profligacy this season; read eight clear-cut chances missed in only eleven appearances and weep.

Benteke’s aerial dominance, and Wilfried Zaha’s second-ball sniffing, may have been key to Palace’s superiority here, but the target-man must offer his side more in front of goal in weeks to come.

As for Eddie Howe’s Bournemouth, perhaps Jermaine Defoe’s wonderful second goal will show the 40-year-old manager the error of his possession-fancying ways. The Cherries love to recycle the football, and full-backs Simon Francis and Charlie Daniels again figured in the top three for total touches of the football here.

Perhaps the direct approach taken by Lewis Cook, in his over-the-top assist for Defoe, may give Howe pause for thought. His well-remunerated, channel-running, veteran striker would surely benefit too.