Remaking Limerick FC’s patchwork squad is a challenge few would relish. And yet, just days after securing Premier Division football for 2018, Neil McDonald has already begun to tackle that herculean task. There will be no holiday for him. Both his future, and his reputation, rest on the outcome. He is, after all, only here because his predecessor failed to scale the same mountain.

Perhaps Limerick’s runaway, 26-point, First Division success lulled Martin Russell into a false sense of security. Perhaps his salesman’s patter matched up poorly against an alleged top-four-sized budget, as many have suggested.

No matter: whether high-caliber players refused to play at the Markets Field, or were never asked in the first place, Limerick began 2017 ill-equipped for an immediate return to the top-tier.

Russell’s transfer strategy appeared to consist of little more than a quick rifle through his address-book. Four former associates were ushered in, including two implicated in Limerick’s 2015 relegation, in Ian Turner and Dean Clarke. Brendan Clarke and David O’Connor, who Russell worked with at Pat’s and UCD respectively, also arrived to boost the Shannonsiders’ dangerously threadbare defensive options.

Options that looked nigh-on non-existent after Paudie O’Connor and Seán Russell departed, to Leeds United and Louisville respectively. The unfairly-maligned Russell Junior’s decision was understandable but, coupled with Shane Tracy’s injury woes, it left his father bereft of choice at left-back. Thomas Robson’s late loan signing, from Sunderland under-23s, was designed to temporarily fill that gap. Hardly the ideal solution for a side that has lacked a specialist left-back for several years.

All of the above, plus a freak pre-season arm injury to O’Connor, left Russell with only four available senior defenders for the opening-day visit of Sligo Rovers. The inexperienced Robson slotted straight into the team, therefore, lining up alongside two other 2015 relegation alumni in Shaun Kelly and Robbie Williams. Tony Whitehead, 21, made up the numbers, despite starting only ten times throughout Limerick’s most recent second-tier stint. 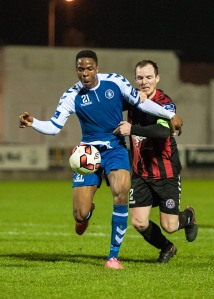 That quartet started together, unbroken, for 13 consecutive league games, seven more than the manager who assembled it. Russell, sacked after a 3-0 home defeat to Cork City, paid the ultimate price for shoddy squad management and a continually naive tactical outlook.

Cork, like Bohemians and Finn Harps before them, did their homework. Russell’s insistence upon passing out from the back was ruthlessly exploited by all three, as high-pressing forced the likes of Whitehead, and error-prone goalkeeper Freddy Hall, into costly clangers. Dearly-held dogmatism is all well and good while it garners results. In the end, both an ambitious Limerick board, and Russell himself, realised it could bring the club no further.

In the event, the man who temporarily held the reins in Russell’s wake lasted longer at the helm. A protracted managerial search, that eventually turned up McDonald, left Willie John Boland minding the senior house for eight league games; with mixed results.

An extremely fortunate away win at St Pat’s, earned with the Russell blueprint intact, kicked off Boland’s interim tenure with a bang. The former Coventry City midfielder had Brendan Clarke, who belatedly replaced Hall two games prior, to thank.

Boland enacted two major changes to Russell’s masterplan: one positive, the other not so much. Encouraging a more mixed style, handing defenders licence to look for the channels when under pressure, was welcome. Cold-shouldering Limerick’s two out-and-out wingers, in Turner and Stephen Kenny, was not. 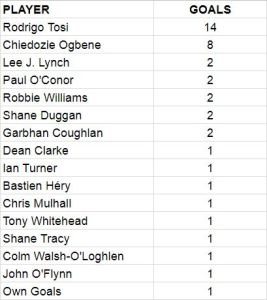 The workmanlike Chris Mulhall was favoured to both, with disastrous consequences for the output of 34-year-old target-man Rodrigo Tosi. Russell’s biggest off-season coup scored four goals — all from crosses — in the opening six games. But, starved of wide service, the one-dimensional Brazilian managed only two throughout Boland’s eight-game stint — both, again, from crosses.

The defence of set-pieces, always shaky under Russell, now finally began to cough up goals-against too. Consecutive games against Shamrock Rovers, Sligo Rovers, and Derry City saw Limerick concede thrice from this avenue.

Neither problem looked likely to be resolved at the dawn of the McDonald era either. A maiden victory at Bohemians saw Tosi get back among the goals — albeit from an indirect free-kick — but Limerick were again wounded at corner-kicks, by both Finn Harps and Bray Wanderers.

McDonald’s preference for a back-three, wholly unsuited to the players at his disposal, was mostly culpable for this goal-glut, however. But, to the Englishman’s credit, he immediately dropped it after June’s Turner’s Cross humiliation. McDonald also, commendably, dealt with mid-season signing Henry Cameron in a similarly swift manner. The 20-year-old New Zealand international, contracted until the end of 2018, has yet to hint at fulfilling his pre-cruciate knee ligament injury potential.

Bastien Héry’s part in that second-city shambles, failing to shuttle across to protect his wing-back — fish-out-of-water Shane Duggan — meant the Frenchman would not become a first-team regular until mid-August. As imperious as Héry’s late-season form was, solving Limerick’s previously glaring number-six problem, his failure to attain match fitness in a timely manner was, to say the least, extremely disappointing.

4-4-2 was restored for the next nine league games, five of which saw a still-wingerless Limerick fail to score. Designed to win second-balls, McDonald’s ultra-compact tactical prescription proved even narrower than Boland’s, further crippling Tosi’s effectiveness.

Peter Berki, a mid-season arrival from Hungary, outshone all his new team-mates at hoovering up the Brazilian’s knock-downs. But the goal-shy second-striker would soon lose his place, sacrificed at the altar of a much-needed midfield-five. 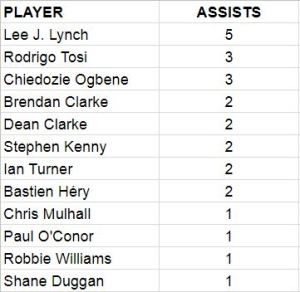 Incredibly, Tosi’s June 2 goal against Bray — turning in a right-wing Dean Clarke cross — proved to be his second-last open-play strike of 2017. Were it not for the striker’s delightful chip at against Cork, Tosi run without an open-play goal would have stretched to a staggering 16 league games. For all Turner’s technical shortcomings, allowing the Cork native’s quality of delivery to walk out the door looks curious in hindsight — particularly given how well the two linked up during Russell’s short 2017 stint.

The rumoured arrival of Barry McNamee’s goals, therefore, would be more than welcome. None of Limerick’s existing crop of midfielders are capable of complementing Tosi with late penalty-area runs; the Donegal native very much is.

Duggan, once hailed as one of the league’s outstanding box-to-box midfielders, proved a particular disappointment, continually turning in lethargic displays, and showing little of the third-man running exhibited by the likes of Dundalk’s Robbie Benson.

Poor at screening the defence now as well, there is precious little to say in the midfielder’s favour — aside from that dramatic last-gasp equaliser in Inchicore, of course. The ridiculous penalty conceded against Shamrock Rovers on the final day unfortunately summed up the captain’s season.

Lethargy was, of course, a deficiency McDonald showed a long-overdue willingness to address straight out of the gate. O’Conor, Kelly, and Williams — handsomely rewarded for Limerick’s collective 2015 failure — were finally jettisoned in July. A goalless draw against Sligo, plus two straight 3-0 reverses away at Derry City and Dundalk, fueled supporter rage — rage that significantly abated as that trio’s subsequent fortunes, and Limerick’s, became apparent.

Chance-creation was clearly at a premium — Lynch topped the final assists chart with just five, after all — but at least McDonald was effecting noticeable improvements to Limerick’s defensive structure. Although poor in the opposition-half, O’Connor proved a major defensive upgrade on Robson at left-back, as those back-post concessions began to dry up. Unfortunately, individual errors (at the Brandywell), and set-piece woes (at Oriel Park) continued to haunt a now relegation-threatened Limerick defence.

August’s defeat of Bohemians stopped a five-game winless rot, but the subsequent 2-0 home defeat to ten-man Finn Harps proved the nadir of McDonald’s short reign. Attempting to break down Ollie Horgan’s second-half 4-5-0 with a bafflingly-narrow 3-4-1-2 system — with wing-backs Cameron and Kenny cutting inside for some unknown reason — was akin to tactical heresy. Brendan Clarke selecting that night to have his worst game of the season did not help, nor did the performance of mid-season loan signing Joe Crowe. 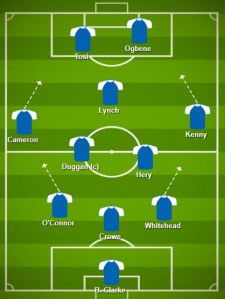 The Norwich City under-23 defender paid with his starting spot after following up his costly error in the Brandywell with another that night. McDonald again acted quickly, but appropriately, ushering in the Whitehead/O’Connor central-defensive partnership that finished the season with relative aplomb. That pairing debuted in Bray, along with the new-look 4-1-4-1 system that remained unbeaten for five games as Limerick avoided the dreaded drop.

Crowe’s removal from the side also welcomed Tracy back into the mix at left-back, after a disastrous, Conan Byrne-inspired, false-start back in June. In from the FAI Cup quarter-final away to Galway United on, the paceless midfielder was ruthlessly targeted by every team Limerick faced until safety was secured. Pat’s, and Byrne, again enjoyed particular joy against the 29-year-old in October, with only some awful finishing, and Duggan’s late leveler, rescuing a point for the Shannonsiders.

Barry Cotter did not fare much better on the opposite flank either. Despite a couple of outstanding showings, most notably at Bohemians in May, the 18-year-old converted attacker struggled to pick up the defensive side of his brand-new position as quickly as Dean Clarke, who was perhaps unfairly overlooked for the right-back berth on occasion.

McDonald did drop Cotter after his horror show in the home win over Cork, however, replacing him at half-time in that game to spare any further Kieran Sadlier-related embarrassment.

There is ample time, of course, for the talented Cotter to learn his trade — along with the teenage quartet that McDonald fielded in Tallaght on the final day. The likes of William Fitzgerald and Colm Walsh O’Loghlen show great promise, but McDonald’s recent interview with the Irish Sun, in which he suggested significant 2018 playing-time will be forthcoming for his crop of youngsters may raise eyebrows — and budgetary concerns — from nervous supporters.

They have every right to be nervous. More than anything now, with only six established senior players signed up for 2018, weary Limerick fans need to see some finished articles imported — and sooner rather than later. A recognised left-back is a must, as is a commanding front-foot centre-back, a positionally-sound number-six, at least one winger, and more than one player with penetrative running in their respective lockers.

Mid-season recruitment was, understandably, a disappointment; convincing players to uproot and move to Limerick for the sake of three to four months of football is no mean feat. This time, there can be no such excuses.

Far from a facelift, McDonald has a full body transformation on his hands. Will he prove a more competent squad surgeon than his predecessor? Or will he be the latest victim of the Limerick board’s knife? Only time will tell.