Less a cup semi-final, more an exercise in underlining the scale of squad surgery facing Neil McDonald this winter. Only 15 minutes of Cork City effort, laser-focused on Limerick’s left-flank, was required to seal the Leesiders’ third-straight FAI Cup final appearance. 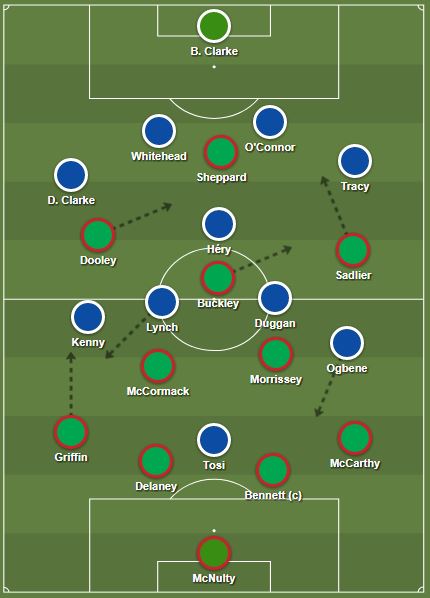 Kieran Sadlier’s attentions forced right-back Barry Cotter’s half-time withdrawal seven days prior. But, although the 18-year-old was removed from the line of fire here, Sadlier had another victim in mind.

Switched from left- to right-wing, after missing out against Dundalk on Monday, the former Sligo Rovers star was the focus of Cork’s early attacking efforts.

Both Cork and Galway United have already picked on Tracy since the 29-year-old’s recent return to league action. Technically-gifted by League of Ireland standards, the midfielder-by-trade’s lack of pace makes him an obvious target when fielded at full-back.

Unable, therefore, to get too tight to athletically-superior wide players, Tracy can be guilty of permitting the ball’s passage into the box too easily.

So it proved for Garry Buckley’s second big chance of the evening, when Sadlier was afforded the space and time to play in Karl Sheppard. Fortunately for the impressively-large travelling Limerick support, the striker’s resultant pull-back to Buckley saw Tony Whitehead spring to the rescue.

Buckley’s first big chance, ballooned over the bar, stemmed from a rare Bastien Hery turnover, but the third hit the net. Popping up at the back-post, his second home, the 24-year-old slotted home Sadlier’s dipping penalty-area assist.

Tracy, caught in two minds about running out to confront right-back Conor McCarthy, who Chiedozie Ogbene belatedly caught up with, fatally allowed Sadlier to run in behind and do the damage. Captain Shane Duggan’s part in this, handing McCarthy off to an out-of-position Ogbene, rather than chase himself, must also be highlighted.

Sheppard’s freedom in the box to lay-off McCarthy’s initial ball was also a recurring theme. The Cork striker, so impressive against Dundalk on Monday, too often received the ball into feet under no pressure from the Limerick centre-backs.

Although O’Connor continually beat the former Shamrock Rovers hitman in the air, both he, and particularly Tony Whitehead, need to work on their proactivity.

One up inside 14 minutes, and off the back of two big games in the prior seven days, Cork immediately dropped the intensity. The near-4-2-4 early on, with Buckley so positionally advanced, disappeared, in favour of a significantly more conservative outlook.

This noticeable gearing-down meant a foothold, and eventually possession-dominance, for Limerick. But that dominance was largely benign, as McDonald’s side again matched impressive defensive organisation with shocking final-third bluntness.

All but one of Rodrigo Tosi’s open-play league goals have been teed up by crosses (with last week’s chip the exception), and yet his teammates continually fail to provide them.

Key to this service-deficit is Ogbene’s maddening reluctance to test his full-back on the outside. Quite where Stuart Byrne’s pre-match comparison’s to Thierry Henry, in which he spoke effusively about Ogbene’s supposed “complete performance” last week, came from is anyone’s guess.

Wide of the mark

The 19-year-old is clearly still extremely raw, nowhere near the top of the trade-learning ladder. Sticking tight to his former underage teammate all game, the athletic McCarthy coped well with Ogbene’s largely predictable infield sorties.

Turned back on several occasions, Ogbene did tee up Tracy for several deep crosses. But the deliveries were poor, meat and drink for the likes of Alan Bennett and Ryan Delaney.

Stephen Kenny, again narrow and ineffectual, was equally disappointing on the opposite flank — with the caveat that Tosi’s immobility helped a couple of the Cork native’s low, near-post, crosses come to naught.

All of the above considered, Lee J. Lynch’s almost-customary rightward drifts were extremely necessary to add much needed width to Limerick’s play. If McDonald intends to persist with Tosi next season, this deficiency must be second on his winter to-do list. Recruiting a left-back-by-trade is, of course, way out in first.

A perfect foil for Tosi, Peter Berki does the lateral running the 34-year-old Brazilian is not capable of doing. But the Hungarian has been perplexingly overlooked in recent weeks, particularly in Bray, where his second-ball hoovering would have been valuable against the Seagull’s incompact eleven.

Sacrificed to accommodate an additional central midfielder in McDonald’s new-look 4-1-4-1, Berki’s 70th-minute introduction here was a welcome one. But his task, on the left of that same 4-1-4-1 was an equally perplexing one. Tosi remained isolated, and Cork remained comfortable.

And, the ex-Cork striker did spurn one big open-play chance to pull the trigger from a Tosi headed flick-on, but hesitated, allowing the excellent Delaney to come across and block. It was too late for another chance like that to materialise.

Lingering doubts, therefore, about the manner and timing of McDonald’s changes. But, in short, Limerick were simply outclassed here, by a far superior side firmly stuck in second-gear.

Cork could, and perhaps should, have been three or four goals up inside 15 minutes. And Limerick lacked the quality, and cohesion, in the final third to redress their ultimate one-goal deficit.

This was not an embarrassment for the Shannonsiders by any means, however; far from it. McDonald has already upped the professionalism and organisation levels since his arrival, after bravely taking the mid-season scalpel in hand.

But the Englishman has far, far more off-season work to do, if the squad built by his predecessor is to be moulded into one capable of challenging the likes of this Cork City side for major honours.