Stuart Byrne, in the employ of RTÉ on Wednesday night, certainly raised some eyebrows with his man of the match selection.

Byrne’s decision to plump for Dundalk’s Patrick McEleney set Twitter tongues a-wagging; and perhaps understandably so, given the number-10’s failure to create a single chance in the Rosenborg defensive-third.

From the band-of-three behind goalscorer David McMillan, McEleney was creatively outshone, both by fellow Derry City alum Michael Duffy, and the ever-industrious John Mountney.

Shouts that either of that duo would be more deserving of Byrne’s favour were somewhat justified then. But to boil down McEleney’s performance to the number of key passes completed would be to miss the point.

The 24-year-old’s performance was precisely the reason that the Lilywhites’ draw with significantly more storied opposition was met with disappointment. And the Derryman is also precisely the kind of player that Cork City, ordinary in defeat against the relatively lesser lights of Larnaka, so sorely lacked.

Unsurprisingly, Rosenborg manager Kare Ingebrigtsen went for his usual, ultra-rigid, 4-1-4-1/4-3-3 system at Oriel Park. With a functional central midfield trio, and little freedom to roam afforded to his troops; only attacking right-back Vegar Hedenstad was allowed to stray from his moorings. 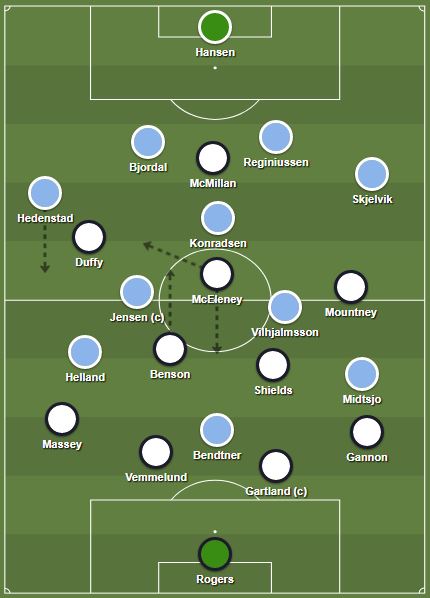 Faced with the now almost customary task of breaking down a deep-lying, defensive, opposition, Dundalk’s Stephen Kenny more or less stuck to his tactical guns; albeit with his own unit, wary of the dreaded away goal, sitting a little deeper than usual too.

This shared caution created a rather ponderous affair of few chances; one that greatly resembled the stasis that was to follow at Turner’s Cross the following evening.

Cork too were posed with the task of picking their way through a massed visiting defence. This, however, came as more of a surprise, given Larnaca’s significant Spanish influence.

Expected to dominate possession, and offer up space for Sean Maguire to counter-punch into, the Cypriots instead, more or less, aped the approach taken by their Norwegian counterparts the previous evening.

In that respect, John Caulfield probably paid for the European successes of his longtime sparring partner Kenny; ratcheting up the Larnaca respect levels and forcing the Leesiders to play on the front foot.

Still a quite direct and physical side, despite a significant 2017 moderation-in-style, Cork ultimately flunked the same task that Dundalk pretty much passed one night prior.

Key to this performance differential was McEleney, and, more broadly, the complexions of both sides’ respective central-midfield mixes.

With Rosenborg marking man-for-man in the middle, Dundalk would have had trouble working the ball forward — were it not for the conduit that McEleney’s intelligent movement so regularly provided.

The number of touches racked up by the 24-year-old throughout Wednesday’s contest both made him the game’s most important actor, and attracted Byrne’s deserved attention.

Frequently dropping deep to receive the ball from his defenders, before drifting left to create overloads with Duffy and Dane Massey, McEleney demonstrated exactly how much he has matured as a footballer in the last 12 months.

Number-10 Garry Buckley, who is more of a converted number-eight than a genuine craftsman, won plenty of ball but did little with it. Meanwhile, Gearoid Morrissey offered few, if any, of Robbie Benson’s third-man runs, that so troubled Rosenborg.

With inertia ahead, and stand-in centre-back Conor McCormack pressed by burly striker Florian, Ryan Delaney had a problem on his hands — or, rather, at his feet. This was not a problem the former Wexford Youths defender managed to solve.

Regularly losing possession on his European debut presumably did not help Delaney’s confidence, and the callow loanee was culpable from a defensive perspective too. Here, is where the differences between the two Irish sides end, and their similarities very much begin.

Although Rosenborg chose not to press Dundalk’s defence —  a fruitful tactic for the Lilywhites’ 2016 Europa League opponents — captain Brian Gartland coughed up a goal anyway, by losing his opposite number Tore Reginiussen in the defence of a pretty unthreatening-looking free-kick.

Mark McNulty repelled an early Florian sitter, from a through-ball that never should have emanated from Delaney’s zone. And, while Cork’s concession also stemmed from a poorly-defended set-piece, it owed everything to that very same miscommunication.

Hector Hevel’s fatal corner-kick, reader’s will recall, was conceded by Steven Beattie’s gallant attempt to clear the Dutchman’s original cross off the goal-line. That very cross, which Delaney failed to close down, was teed up by both McCormack and his nerve-jangled partner challenging for the same aerial duel with Florian — unforgivably amateurish stuff.

Ultimately, both sides’ defensively frailties could, and probably will, prove their undoing. But, despite their 12-point league deficit, if any side is to survive this round, and outscore the opposition, it will be Dundalk.

Quite simply, Kenny’s side have the midfield guile required to break down a professional, full-time defence — guile that Cork clearly do not yet possess. Boiling it down to the difference between Messrs. McEleney and Buckley may seem reductive, but it is illustrative.

Soon to be robbed of Maguire’s imperious movement too, the domestically-unassailable Leesiders are about to look very toothless indeed. Nowhere will that be more obvious than on the battlefields of Europe — if, that is, they can pull it out of the fire on Wednesday evening.