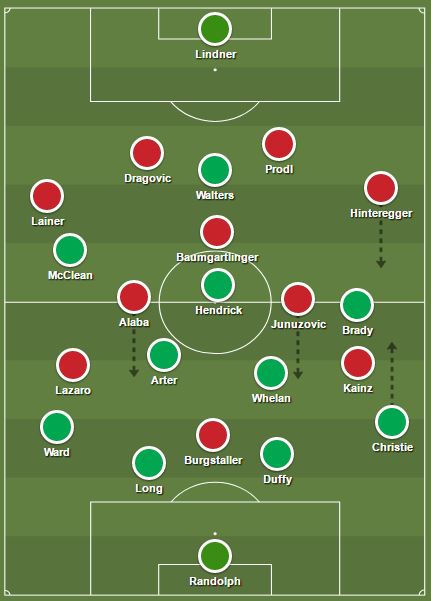 Widely expected to persist with the back-three that resurfaced against Moldova in March, Austria manager Marcel Koller instead sprang a tactical surprise.

Fielding Augsburg’s Martin Hinteregger at left-back in a 4-1-4-1 formation, raised eyebrows from the many who expected Ireland’s right-wing pair of Robbie Brady and Cyrus Christie to run rampant against the centre-back-by-trade.

But, with Austria on the front-foot from the off, that mismatch was turned firmly on its head. Brady’s bookable lunge on Hinteregger, on the half-hour mark, led directly to the succession of corner-kicks from which the auxiliary full-back opened the scoring.

David Alaba, the provider, and fellow central midfielder Zlatko Junuzovic, regularly pierced Ireland’s midfield line in the opening half-hour — as their on-paper markers, Harry Arter and Glenn Whelan, struggled to get to grips with their tormentors.

Meanwhile, just ahead, Jeff Hendrick, again drew the fish-out-of-water card, as the unnatural number 10 failed utterly to mine the oceans of space either side of Austrian captain Julian Baumgartlinger.

Many called for Ireland’s only natural number six, Whelan, to be benched in favour of the again-overlooked Wes Hoolahan for this one. But, it was Hendrick, who also struggled in the hole for Burnley this season, who stuck out like a sore thumb.

Wasting Ireland’s first corner of the game, won only in the 35th minute, with an overhit inswinger, summed up Hendrick’s half. Favoured here for his industry, ahead of the infinitely more crafty Norwich City playmaker, stands as O’Neill’s most obvious misstep.

Recognising the difficulties experienced by both Brady and Hendrick, O’Neill shuffled his deck before half-time. Shifting the former wide-left, and the latter wide-right, produced a traditional 4-4-2, with James McClean promoted to the front-line.

Unfortunately, this tactical tinkering only further exposed O’Neill’s already loose central midfield. Alaba again received the ball in behind Arter, early in the second-half, to complete a one-two with one-cap Florian Kainz, and strike wide — as Whelan attempted a desperate recovery run.

Drifting in behind the incredibly open central midfield of Hendrick, and Wes Hoolahan, that O’Neill’s latest bout of tinkering had created, Grillitsch forced a hugely important block from Shane Duffy, before testing Darren Randolph with his second bite at the cherry.

Although comfortably outplayed, Ireland’s one chink of first-half light always showed signs of bursting into flame. Spared on the flanks, and between the lines, Austria also looked vulnerable at centre-back, where blocker Aleksandar Dragovic exhibited a tendency to regularly leave his defensive line and foul Walters from behind.

And, after McClean joined Walters up top, the Bayer Leverkusen defender’s failure to win his physical tussles began to gift chances to Ireland. In fact, the chance Arter skied — fashioned by McClean reaching a long-ball ahead of Dragovic — is likely to explain O’Neill’s almost instantaneous decision to spring Daryl Murphy from the bench.

Murphy’s arrival meant that Ireland’s attack was two target-men strong, and it almost immediately paid a dividend. Dragovic was again beaten to a long-ball, this time by Walters, who headed on to his new strike partner — tempting goalkeeper Heinz Lindner, who Ireland so failed to test, into a barmy run off his line to distract Murphy.

Much was made of the injury that almost forced Dragovic off prior to Walter’s eventual equaliser. But, the 26-year-old’s woes, in the face of Ireland’s direct approach, represented a problem for Koller long before the Stoke City man nudged the centre-back aside to deposit yet another fruitful long-ball.

A pair of late Austrian goal-line clearances, to repel two Brady corner-kicks, may tempt Irish fans into thinking they were hard done by here. But, in truth, O’Neill was fortunate that his rather desperate in-game changes were enough to salvage a point from a game his side should have won.

Austria, with their dodgy third-choice goalkeeper, a goalless front three, a one-cap right-back, and an out-of-position left-back, will never be riper for the picking. Instead, they remain on the tree, and Ireland’s World Cup hopes remain in the balance.

Tactics Truck v2.0 is the work of Alan O’Brien. You can follow the author on Twitter @alanob2112

One thought on “Republic of Ireland 1-1 Austria: Austrian discomfort with the direct approach bails out O’Neill”