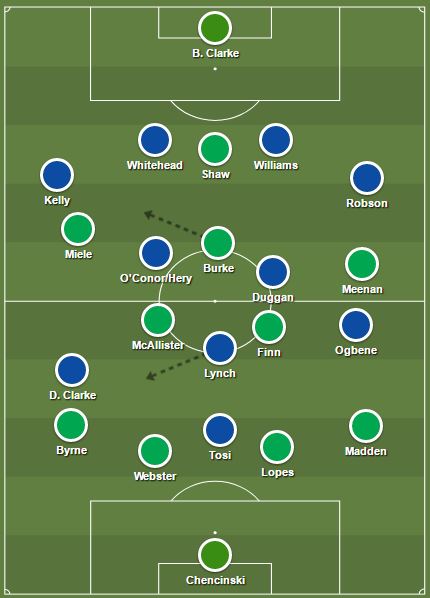 With regular left-back Trevor Clarke suspended for this one, Rovers manager Stephen Bradley opted to hand 23-year-old Luke Byrne his first league start of the season.

Byrne, whose cruciate ligament knee injury limited him to only one appearance in 2016, was unsurprisingly the target of Limerick’s attacks from the off.

Willie John Boland’s side continually focused their efforts down Byrne’s flank, where number 10 Lee J. Lynch drifted wide to combine with the pacey Dean Clarke — in for the workmanlike Chris Mulhall, breaking a run of four unchanged Boland starting lineups.

While Byrne looked uncertain whenever Clarke had possession of the football, the returning full-back was hugely helped by Limerick’s failure to provide regular service to the winger.

Hamstrung by Bradley’s ultra-impressive midfield press, and rendered leaden-footed by a run of five games in 15 days, Limerick’s central midfield was unable to work the ball out to Clarke with any great regularity.

Led by the energetic running of Graham Burke and captain Ronan Finn, the Hoops quickly confronted Limerick the instant the football entered the pitch’s middle third — forcing the Shannonsiders into a series of long balls forward that, more often than not, saw David Webster best Rodrigo Tosi in the air.

2. …but failed to present a coherent one of their own

Reminiscent of the manner in which Bray Wanderers optimistically attempted a string of channel-balls for 32-year-old target man Anto Flood to chase against Limerick in March, Rovers appeared keen to ask the same of their own towering striker Shaw here.

The assumption underpinning this tactic — that Limerick’s ever-present defence lacks pace — is a sound one, but Shaw is hardly the type of frontman to profit from it.

Not to mention the fact that Boland’s side, as was the case under predecessor Martin Russell’s tenure, are not exactly inclined to hold a high defensive line. With little space in behind to explore, therefore, Rovers should have focused all their efforts on exploiting the joy they were getting between the Limerick lines.

Drifting leftward, into the space that the half-fit Paul O’Conor was ostensibly holding, Burke caused complete havoc in the first-half; seeing an early penalty-box effort blocked by O’Conor, and completing a 14th-minute one-two with Shaw to fire a resultant effort inches wide of Brendan Clarke’s left-hand post.

The Hoops’s reluctance to work the ball to the flanks, where both Darren Meenan and Brandon Miele saw little action was also ill-advised, starving Shaw of the type of service he can exploit — as seen by the near-post sitter the former Longford striker missed from Finn’s 23rd-minute right-wing cross.

A greater focus on wide areas surely would have also increased the final total of four corner-kicks won by the hosts; another avenue of attack that Limerick continually looked ill-equipped to defend against.

Limerick’s confused marking system saw Roberto Lopes get a free run to the near-post, to head home a Burke corner. And the central-defender was almost allowed to repeat the feat in the first minute of the second-half, with Finn very nearly converting his team-mates misdirected header at the back-post.

With his side still completely in the ascendancy in the opening 15 minutes of the second-half, against a pretty impotent-looking Limerick side, there was little justification for the negative tactical switch that Bradley enacted just before the hour-mark.

Removing Meenan, in favour of 19-year-old Sam Bone, and asking the latter to hold in a 4-1-4-1 shape stood as an unnecessarily conservative move from a manager whose side were still blessed with momentum.

Quickly, with Shaw isolated, Rovers went into retreat-mode, with all ten outfield players marooned in their own half as early as the 68-minute mark.

4. …but Boland failed to react in a timely manner

With this untimely retreat in mind, it seems baffling in hindsight that Limerick’s interim manager waited until the 82nd minute to introduce striker John O’Flynn up top alongside Tosi.

The failure to give O’Flynn the minutes he needs to work his off-the-ball magic has been a consistent theme of this opening round of games, and so it proved again here.

The wonderful movement displayed by the former Cork City man, to drift off the back of Webster and cushion Lynch’s 86th-minute path left-wing cross into Tosi’s path, did not deserve to be foiled by Lopes’ resultant block.

Despite wasting their first clear chance of the game, there was still time for O’Flynn to fashion another, dummying Ogbene’s last-minute pass for Tosi to snaffle at the back-post.

It is no exaggeration to say that Limerick wasted the 23 minutes between Bone’s introduction and O’Flynn’s. Had Boland reacted sooner to Bradley’s flub, a leggy Limerick squad might be scuttling into the second round of fixtures with three points they scarcely deserved.

Don’t forget to join Alan O’Brien (@alanob2112) and former LOI manager Noel O’Connor next Saturday evening for live coverage of the Shannonsiders’ clash with Ger Lyttle’s Sligo Rovers — bookmark Limerick Soccer Live now so you don’t miss out! And, if you do miss out, you can listen back to old shows here.