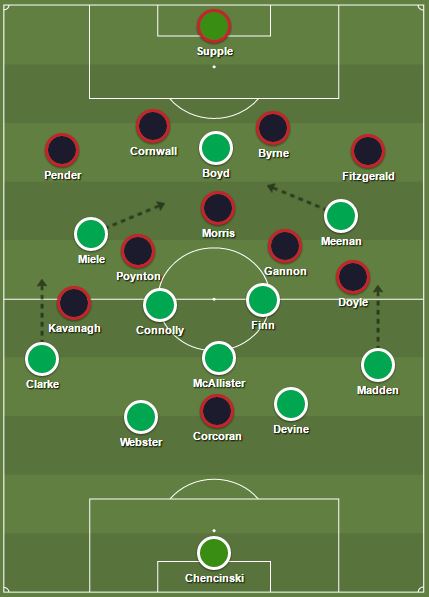 1. It’s difficult to see where Bohs’ goals are going to come from

Kurtis Byrne’s Inchicore move, paired with Ismahil Akinade’s ongoing recovery from surgery, meant that the Gypsies arrived in Tallaght shorn of 50% of their 2016 goalscoring prowess. And on the evidence of this showing, Byrne’s ten-goal haul will prove difficult to replace.

Although starved of service into feet, Dinny Corcoran toiled up top before his half-time, injury-enforced, departure. Meanwhile, to Corcoran’s left, Jamie Doyle, signed in the off-season from second-tier Shelbourne, worked hard to protect Lorcan Fitzgerald, but offered little in the Rovers half.

On the opposite flank, Paddy Kavanagh’s performance scarcely merited the focus Keith Long’s tactic trained upon him. Ian Morris used his freedom at the base of the visiting midfield to pepper diagonals at the 31-year-old, with the assumed goal of besting young auxiliary left-back Trevor Clarke in one-on-one battle.

Instead, Kavanagh was soundly defeated by his 18-year-old opponent in both halves, failing to track the teenager and prevent him from attempting Rovers’ two likeliest efforts of the first-half.

Long’s side only really threatened (sporadically) from set-pieces, particularly from the long-throws of Morris, the last of which panicked Daniel Devine into conceding Georgie Poynton’s injury-time penalty. Morris, comfortably Bohs’ best player on the night, also hit the post from a 65th-minute corner — tellingly, the Gypsies’ first chance of the game.

Two much-needed injections of pace, first from Corcoran’s replacement Dean Casey, and then from Kaleem Simon in the game’s closing stages, improved Bohs slightly as an attacking force. Long would do well to consider starting one or both when next they expect to be forced long by a high-press similar to that which the Hoops employed here.

Bohs’ opening day disaster at home to Derry City inspired Long to make a change to his midfield, with Keith Ward’s creativity sacrificed here, in favour of Philip Gannon’s functionality. Doyle, who partnered Corcoran up top at Dalymount Park, moved out left to occupy Ward’s former role, turning 4-4-2 into a significantly more cautious 4-1-4-1.

With 25% of the division due for relegation to the First Division graveyard in October, many have predicted a rise to prominence of safety-first tactics. Long’s approach to what was, on paper at least, a tough away trip to a much-fancied side, may represent an early sign of this feared sea change.

Neither Poynton, nor Gannon, was likely to provide the dynamism required to regularly support, or run beyond, an isolated Corcoran. Instead, both were instructed to perform spoiling roles, taking turns to sit on Rovers’ holding-midfielder David McAllister, and force Stephen Bradley’s centre-backs — particularly the agricultural Devine — to kick fruitless long balls.

Boh’s first-half midfield pressing was actually very effective, preventing Rovers from creating any chances through the centre. But, expecting players at this level to keep that up at this stage of the season is a tough ask, and Rovers began to find space either side of Morris after half-time.

Ryan Connolly availed of that space to tee up Simon Madden’s cross for the opening goal, from which Brandon Miele was allowed to collect by a failed interception from half-time substitute Stephen Best.

And the 19-year-old centre-back erred again for Michael O’Connor’s counter-attacking second, failing to prevent the former Dundalk striker from converting from close-range. That’s the thing about setting up for a draw — one error and you’re goosed, let alone two.

3. Bradley has yet to hit upon his optimal central-midfield mix

It’s easy to understand the desire to fit the attacking midfield talents of both Ryan Connolly and Ronan Finn into the same team. But Rovers manager Stephen Bradley may need to consider omitting one if he is to hit upon his strongest possible midfield combination.

Dropping Roberto Lopes from the holding role in his 4-1-4-1 formation suggested that Bradley was unhappy with the former Bohs player’s distribution against Dundalk last Friday. Instead, another summer signing — former Stevenage midfielder David McAllister — was fielded in front of defence here, with a view to moving the ball better from back-to front.

Bradley must have been frustrated to watch Long’s side continually prevent McAllister from getting on the ball in the first-half, as his side’s centre-backs kicked possession away cheaply time and time again.

Neither Connolly, nor Finn, were capable of positioning themselves deeper in such a way as to provide the Hoops a more palatable route out of defence. With both players more comfortable in advanced roles, perhaps it might be wiser for Bradley to employ just one at number 10 in a 4-2-3-1 for the time being, with Paul Corry possibly getting a look in alongside McAllister in a double-pivot.

Given the problems the hosts experienced in the centre of the park, not helped by the churned up midfield surface, the performances of full-backs Clarke and Madden were a godsend.

Facilitated by some clever infield movement from both Brandon Miele and Darren Meenan, both players’ commitment to the overlap stood as the clear highlight of Rovers’ indifferent attacking play.

Clarke ignited the game after a dreadful opening 25 minutes with a brilliant infield-dribble, past Poynton, to win a Miele free-kick from former team-mate Rob Cornwall.

That produced the first shot-on-target of the game, and Clarke went on to fashion two more great shooting chances before half-time, the second of which broke from Madden’s failed attempt to get on the end of a Finn through-ball in the Bohs area.

Madden assisted Miele’s opener with a cross, while Clarke held off Kavanagh to start the counter-attack that produced O’Connor’s insurance goal. Clarke probably earned his foul-mouthed celebratory post-match chat with RTÉ’s Tony O’Donoghue — that’s how impressive the 18-year-old was here.

Don’t forget to join Alan O’Brien (@alanob2112) and former League of Ireland manager Noel O’Connor next Friday for live coverage of the Shannonsiders’ clash with champions Dundalk at Oriel Park — bookmark Limerick Soccer Live now so you don’t miss out! And, if you do miss out, you can listen back to old shows here.