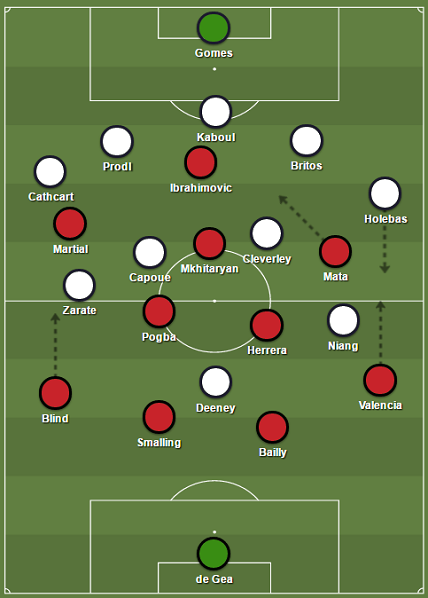 Here, it was Walter Mazzarri’s turn to leave the front door wide open, opting to revert to a three-man defence, drop Behrami, and plump for a 5-4-1 formation.

…and how it was punished

Watford’s resolutely high defensive line did not help their cause either, allowing Mourinho’s side to complete a handful of unpressed through-balls that should have borne fruit.

Juan Mata was invariably the man on the end of those through-balls, courtesy of his clever infield movement — designed to further overload the Hornets’ undermanned midfield. And, predictably, it was Mata’s influence that ultimately broke the deadlock, when the Spaniard arrived untracked to finish a move he popped up free between the lines to start.

Acknowledging his pre-match flub, Mazzarri changed things at half-time, adding a central midfield body by reverting to the 4-1-4-1 formation that triumphed over Burnley last weekend.

To achieve that end, the Italian removed centre-back Miguel Britos in favour of Daryl Janmaat, who was handed an unfamiliar left-wing role, with a view to shackling Valencia’s forward momentum. Niang was shifted to the opposite flank, out of the firing-line, while Mauro Zarate joined Capoue and Cleverley in the middle.

This reshuffle was very much a case of shutting the gate after the horse had bolted, however. Mourinho’s charges were now comfortable to sit in, prevail upon Watford’s errant passing, and hit them on the break.

Martial’s insurance goal resulted from this avenue, when Capoue was dispossessed by the prolifically ball-winning Herrera, leaving Cleverley stranded in front of his back four, powerless to prevent the oncoming red tide.

Out of his depth defensively in the first-half, the restoration of Niang to a right-wing role saw the Milan loanee flourish up against the one-paced Daley Blind. His successor in the Valencia-minding role, Janmaat, should have halved the deficit by converting Niang’s back-post cross, after the Frenchman left Blind for dead near the touchline.

But, just as the visitors looked like regaining a foothold in the contest, the wily Mourinho sacrificed Mata to drop Fellaini in front of his defence in a 4-1-4-1. Mazzarri’s subsequent call to restore a central midfield two, with Stefano Okaka joining Troy Deeney up top further dulled his side’s momentum.

Once again, the Hornets were cut open through the middle, with both Mkhitaryan and the wasteful Zlatan Ibrahimovic guilty of spurning big late counter-attacking chances gleaned in this manner. This was not one for the former Napoli and Inter manager’s C.V.