A double positional error from Eden Hazard, one either side of half-time, saw Chelsea concede the same goal twice — ending their 13-game winning run, and reopening the Premier Division title race to Tottenham Hotspur et al. 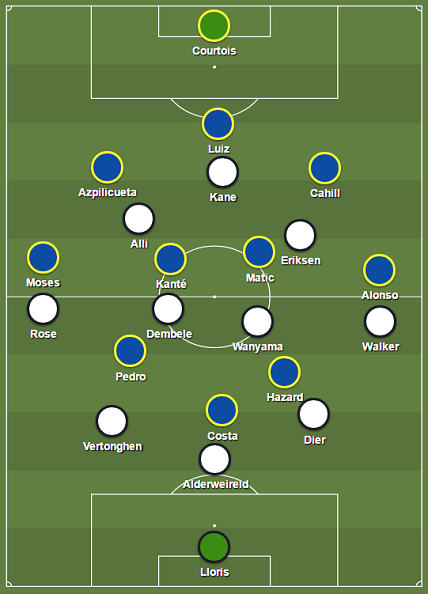 Aping the example set by Pep Guardiola’s Manchester City, Pochettino matched Conte’s troops like-for-like with a 3-4-2-1 of his own, designed to press Chelsea’s centre-backs and central midfielders in straight 3-on-3 and 2-on-2 battles.

Eschewing his preferred 4-2-3-1 formation, that featured in November’s reverse fixture, the Argentinian nonetheless persisted with the high-pressing — and related high defensive line — that so discommoded Chelsea in the first-half of that particular losing effort.

Although Jan Vertonghen erred in operating the offside trap early on — allowing Eden Hazard to very nearly convert Nemanja Matic’s simple ball over the top — Spurs found some joy with their pro-active approach, fashioning half-chances for Victor Wanyama and Christian Eriksen by dispossessing Hazard and N’Golo Kanté in their own half.

Both off-target efforts were attempted from around the D, the same area from which Eriksen earned a half-time lead at Stamford Bridge. But the between-the-lines overloads that facilitated that success two months ago were absent here, as the hosts wasted their central midfield dominance with some overly-keen direct passing in wide areas.

To illustrate that point, wing-backs Danny Rose and Kyle Walker finished the half with pass-completion ratios of 58% and 60% respectively, while central midfielders Wanyama and Moussa Dembele — who also combined brilliantly to nullify Chelsea’s counter-attacking threat — both tallied in the 90s.

When Tottenham did extract some late first blood with the first shot on target of the half, their success was mainly attributable to a positional error from Hazard, who remained forward in the defensive phase and allowed Eriksen to cross freely onto the head of Dele Alli. 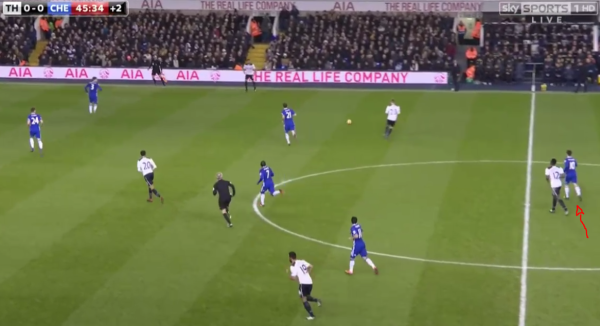 Hazard (highlighted) caught in a central position in the build-up to Alli’s opener. Note that fellow midfielders Matic (21), Kanté (7), and Pedro (11) have not erred in the same fashion

Alli’s marker, Victor Moses, was caught between the 20-year-old and Rose, as Gary Cahill’s poor decision to vacate his area and press vainly — and David Luiz’s resultant confusion — rendered the visitors fatally undermanned.

Hazard was again absent as Eriksen again crossed from an inside-right position for Alli to nip between Moses and Azpilicueta to head home. This time Cahill was better placed to press the cross, but the England international’s attempt to do so did not exactly cover him in glory.

Spurs then predictably dropped off, ceding territory to the league leaders, but the division’s second-best rearguard did not prove as uncharacteristically generous as its visitors’ on the night, as a Conte attack that likes space to run into struggled to penetrate Pochettino’s now deep-lying back five.

Neither replacing the industry of Kanté with the guile of Cesc Fabregas, nor the introduction of a second striker in Michy Batshuayi could materially alter the outcome for the Italian, who will surely lead the inquest into his Belgian attacker’s part in two quite inexcusable, costly, and eerily similar concessions.