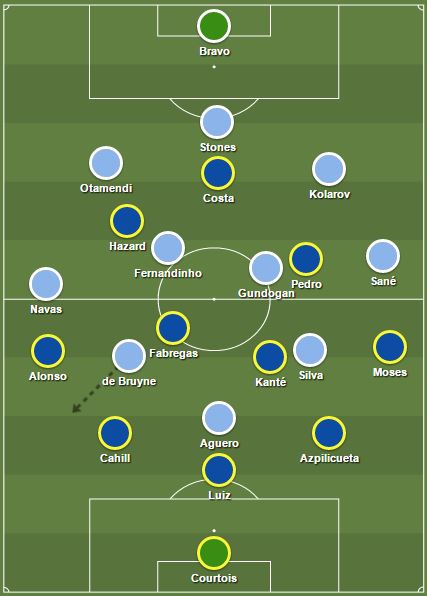 Having favoured a basic 4-2-3-1 in recent weeks, Pep Guardiola resolved the significant pre-match intrigue surrounding his tactical approach by aping the system with which opposite number Antonio Conte has reversed his side’s fortunes.

Perhaps taking his lead from Victor Moses’ unlikely wing-back conversion, the Spaniard sprung a further surprise by selecting two out-and-out wingers, in Jesus Navas and Leroy Sané, to man the flanks alone in a 3-4-2-1.

With both inside-forwards, David Silva and Kevin de Bruyne, remaining narrow in the defensive phase – rather than flattening out into a flat midfield four like their Chelsea counterparts – Sané and Navas looked uncomfortable one-on-one with Moses and Marcos Alonso throughout the first-half.

Indeed, after an ultra-cagey opening 25 minutes, the first real chance of the game, presented to Eden Hazard, stemmed from a Navas positional error – compounded by Nicolas Otamendi’s bounce misjudgment – that the Belgian wasted by unwisely opting to square rather than shoot.

Fortunately for Guardiola, City’s pressing prevalence, and related possession dominance, prevented the visitors from regularly poking this obvious wound. One week removed from witnessing his side’s central midfield get out-manned by Tottenham’s inside forwards throughout the first-half of last week’s comeback victory, the Italian saw history repeat itself at the hands of Silva and de Bruyne.

With de Bruyne often minded to drift right, it was Silva whose pre-eminence between the lines most troubled Chelsea’s central midfield – shorn of Nemanja Matic by a late muscle injury. With replacement Cesc Fabregas interpreting his role in a more advanced manner than the Serbian, Silva regularly found a pocket of space behind the Spaniard’s partner, N’Golo Kanté, from which to create danger.

Kanté endured a difficult half, in which he was the target of much of City’s well-timed pressing, completing only 65% of his attempted passes, and often finding himself caught between tracking the former Valencia playmaker and pressing Ilkay Gundogan.

It was this quandary that led to Silva’s 27th-minute lofted through ball, from which David Luiz blocked Sergio Aguero’s resultant effort. Silva also played the raking cross-field pass that saw Sané escape Moses’ attentions and square for Aguero to waste the first of at least three clear-cut chances.

Kanté’s difficulties continued in the early reaches of the second-half, earning a yellow-card for fouling Silva in the build-up to de Bruyne’s failure to complete a breathtaking Sané-led fast-break.

And Silva again found space behind the Frenchman to tee-up the counter-attack from which de Bruyne smashed a five-yarder off the crossbar, mere moments after Aguero had failed to capitalise on Cahill’s bizarre decision to leave a backwards Alonso pass for his goalkeeper.

By the time Aguero failed again, after Fernandinho dispossessed the abject Kanté in his own half, Chelsea had drawn level with their first shot-on-target; Diego Costa demonstrating the efficiency that the Argentinian sorely lacked by chesting down Fabregas’ long pass, and outmuscling Otamendi to score.

Chelsea’s 70th-minute winner then encapsulated the game’s narrative perfectly, as the Blues escaped allowing Gundogan to walk through the centre of their team, before the devastating Costa beat Otamendi to the resultant clearance and fed substitute Willian to score his side’s second shot-on-target of the afternoon.

Guardiola’s late switch to 4-2-4, facilitated by replacing Jon Stones with striker Kelechi Iheanacho, failed to create further chances for his ill-starred City side, whose makeshift centre-back pairing contrived to gift Hazard a third goal on the break. The Belgian slipped behind Otamendi, for whom Aleksandar Kolarov was unsurprisingly incorrectly positioned to provide adequate cover.

Iheanacho’s minutes may prove a future boon however, as Aguero earned himself what will surely be a lengthy ban for inflicting an injury-time expression of personal frustration on Luiz. The fiery striker knows that matching the productivity of his pre-match co-Golden Boot front-runner would have meant meting out deserved punishment to Costa’s wide-open side.

As it stands, Aguero faces a ban, and Guardiola sits four points behind his seemingly-unbeatable colleague, facing a raft of completely justified criticism about his chosen back-line. This truly was a thrilling game of fine, fine margins.