Manchester United inflicted a second consecutive 4-1 defeat on Aston Villa to relieve some of the pressure on beleaguered manager David Moyes.

Aston Villa dispensed with their usual 4-3-3/4-5-1 shape in the absence of injured midfielder Karim El-Ahmadi. They instead lined up in a 4-2-3-1/4-4-1-1 formation with Andy Weimann playing off lone striker Christian Benteke. Marc Albrighton came into the side for a rare start on the right flank. Ciaran Clark made his return at the heart of the defence beside the reliable Ron Vlaar. Nathan Baker dropped out after an error-prone performance last week against the Potters.

Manchester United were back to 4-2-3-1 too after their failed experiment with 4-3-3 against City in midweek. Juan Mata was back in the number 10 role that he executed to such effect against West Ham. Shinji Kagawa also reprised his left-wing role from that game. Indeed, bar the presence of Nemanja Vidic in place of Michael Carrick in the centre of defence, Moyes was fielding the same eleven that secured that 2-0 triumph at Upton Park.

Paul Lambert may have been forced to change shape due to player availability, but that forced switch had an important side effect when his side were out of possession. Andy Weimann, fielded in the number 10 role, joined striker Christian Benteke in pressing the United centre backs when they had the ball. Nemanja Vidic looked particularly uncomfortable with this treatment, attempting 6 long balls in the first half and completing only 2 of them. Indeed, Villa’s pressing was forcing United to be far less accurate in possession than usual. United finished the half with a 76% pass completion record, as compared with an average of 84% in the Premier League this season. Midfielders Marouane Fellaini and Darren Fletcher were particularly culpable in this regard, producing figures of 74% and 79% respectively, far too low for players in a supposedly top side. By the 20 minute mark, the possession count was 50:50, and Villa were a goal up – a marvellous free kick from the excellent Ashley Westwood.

United attack down the left, Villa down the right

Both teams were clearly focusing their play down one side of the pitch – United’s left and Villa’s right. Paul Lambert couldn’t have known for sure that Alexander Buttner would start at left back for United, but it was clear that Villa were set on taking advantage of the rare presence of a genuine winger in the side in Marc Albrighton. Both of Villa’s most common passing combinations in the first half had the young winger as their target – Bacuna (playing at right back) to Albrighton (8) and Weimann to Albrighton (7). This is highly unusual for Aston Villa – before today’s game no side in the Premier League looked to attack down the right flank less often than the Villains.

Buttner picked up a very early booking and possibly should have picked up a second one when he took out Albrighton around the ten minute mark. Albrighton attempted three crosses in the first half, completing two, and was a constant threat. This was in stark contrast to the performance of Ashley Young, tasked with playing an identical role on United’s right – 0 crosses completed out of 2, 17 passes attempted and 47% completed- comfortably the lowest success rate on the pitch.

Fortunately for United, they were clearly looking to focus their play down the left. As poor as Buttner was defensively, he was excellent going forward, constantly making overlapping runs to allow Kagawa inside. One such instance of this complementary movement led to the equaliser – Kagawa cutting inside to cross for Wayne Rooney, who converted his free header from the penalty spot after Ciaran Clark was drawn towards the run of Juan Mata.

Manchester United focus their play overwhelmingly down the left

This focus on the flank sporting a playmaker rather than the one sporting an out-of-form winger meant that United made far fewer crosses than usual – five in the first half as compared with an average of nearly 14 this season. This shift in emphasis paid dividends for the second goal just before half-time – Kagawa and Mata had switched positions as United looked to break. The former threaded a delighful through ball for the latter, forcing Bacuna into the foul. Rooney slotted away the penalty.

Villa came out of the blocks extremely well in the first 15 minutes of the second half and should have been at least level after this purple patch. They stuck to the strategy that they came into the game with and it should have borne fruit – were it not for the profligacy of striker Christian Benteke. First, he got on the end of a Westwood cross from a left-of-centre area, after having been played onside by Buttner. He dallied and substitute Carrick (playing at centre back) nipped in for the saving tackle. Then, around the 50 minute mark, Albrighton got to the byline twice, producing two great crosses. The first was not connected with. The second found the head of Benteke in the six yard box. Again, he failed to score. 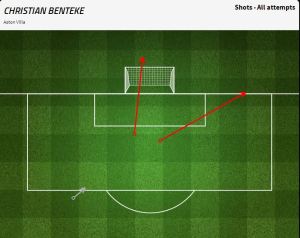 United, however, were now proving far more capable of evading the Villa press. The introduction at half-time of Michael Carrick at the back in place of the injured Rafael (Jones moved to right back in his stead), was very important in this regard. In his 45 minutes on the pitch, Carrick attempted 20 passes with a 100% completion rate, including 4 successful long passes. Considering that he also made the aforementioned saving tackle at 2-1, it was a vital contribution. United moved the ball through midfield better and finished the game with a much improved 82% pass completion ratio. Fellaini in particular had a vastly improved second half, upping his numbers to 85% and combining with the impressive Adnan Januzaj on the left in the lead up to the fourth goal. His defensive contribution was also hugely important, winning numerous aerial duels against Benteke from Guzan goal kicks, and making 5 tackles.

Carrick’s flawless passing performance at the back (second half)

Aston Villa will be left wondering how this game culminated in another 4-1 reverse. The answer? Profligate chance conversion from Christian Benteke was partly responsible, but individual errors at the back was the key – Ciaran Clark’s abandonment of Wayne Rooney in the box for the first, Bacuna’s mistimed challenge for the penalty and Bertrand playing Fellaini onside for Mata’s third. It was a shame because for large parts of the game they were the better side, and in Ashley Westwood, they sported the game’s best holding midfielder. Not only did he score a goal, he also executed his deep-lying playmaker role with aplomb, spreading the ball to the flanks and completing 15 out 17 attempted long passes. He was integral to Villa’s strategy and unlucky not to set up at least one goal too – a fantastic long pass over the top to Benteke just before half-time and the aforementioned cross early in the second half to the same man both deserved better end results. Villa created more shooting opportunities than the home side (10 to 9) but to convert only one of those into a shot on target (Westwood’s goal) is truly awful.

Moyes will be delighted with the way in which his side prevailed upon the opportunities presented to them. 4 goals from 6 shots on target is an impressive return. United did look far better balanced today – the old Ferguson strategy of playing a conventional winger on the right to stretch the opposition and a playmaker on the left to find the resulting gaps worked well, particularly with addition of Juan Mata in the hole where he belongs. There is still a lack of guile in deeper areas however. Neither Fellaini nor Fletcher played a single key pass today – a common theme. The performance of Ryan Giggs in that position at home to Olympiakos last week and away to Leverkusen earlier in the season is evidence of what United are missing. A deep lying playmaker capable of moving the ball forward quickly and accurately is particularly important against sides who look to sit off and frustrate. Villa weren’t doing that today and so the problem wasn’t as evident.

A final word for the performance of young Adnan Januzaj when he came off the bench. He only played 22 minutes of normal time and yet completed 3 dribbles, more than any other player on the pitch, creating the fourth goal in the process for fellow sub Javier Hernandez with a perfect cross from the byline. Given his appalling performance the last time we saw him against Liverpool, his cameo today will be extremely encouraging for Manchester United fans.